Posted on December 2, 2012 by Avi Benson-Goldberg

Before there was an operation that was almost a war that kept me on the edge of my seat as much as it sat in the back of my mind, we went on a tiyyul. Tiyyul is a sort of quintessentially Israeli thing. It’s not a field trip. It’s a journey somewhere, but it’s short, and you know you’re meant to come back. Tiyyul is a group forcing their way into the liminal space where bonds are forged, and then allowing themselves to be expelled again. 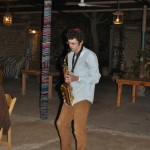 Tiyyul often has a talent show.

It’s only fitting that a place like the Pardes Institute of Jewish Studies has a bunch of weirdos with amazingly strange talents. It’s even more fitting that my exposure to these talents occurred in a fake bedouin tent in the middle of the Negev.

A word, if I may, about the tent: I’m pretty sure it’s a sin to have buildings built this way. Probably because there was some witchcraft involved. This “tent” was an inside made out of OUTSIDES! It was just the space between a bunch of buildings, that had been roofed over. There was a tree in the bathroom?! I can’t even imagine what tzuris they have getting Shabbos taken care of down there: where’s the public space end and the private space begin?

That’s also often how I feel about tiyyul, and talent shows: when are they like Vegas, and when are they like Poppop’s last cruise to Malta? When am I expected to keep every experience a secret only for those of us involved, and when can I share? I was asked to share, and I tried to figure out a way to share. But I couldn’t really. It was too snarky, too mean. And I loved every thing of it. It was unholy to dismantle our talent show. 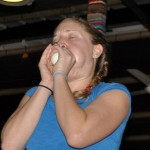 But I’ll try one more time.

[It’s important to know that the people who owned the tent had a spinning class for 5 hours while we had a talent show, prayed, and ate dinner. They may have been powering our electricity? I hope so. We used and needed a lot. Thank goodness for women in spinning classes.] 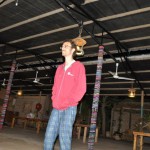 Derek Kwait gave us the most amazing feat of memory, that I still haven’t tried to fact check–he listed each president, plus their political party, plus their state or territory or colony of origin. Plus middle names. That’s a lot of plus. And the whole list felt right, and if that isn’t a parable then I don’t know what is. 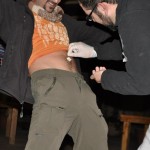 Joseph Shamash, on the other hand, presented a feat of bellybutton packing. I mean this literally. He, with lovely assistant Dustin, packed as many small desert rocks as possible into his absurdly deep bellybutton. Final tally? 10. Quite a success.

Most of this write up may have been silly. I’m ok with that. It was a silly talent show. But it was a good one. I have the utmost respect for my peers–for performing, and for creating a safe space in which to perform.

Two weeks later, post one almost-war, I’m proud that we carried it back with us from our tiyyul.