Posted on December 12, 2012 by The Director of Digital Media 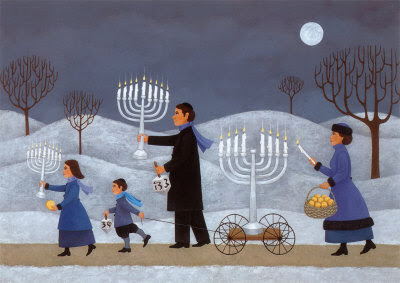 Hanukah stands alone in the Jewish calendar in many ways.  It is the holiday with the least ritual elements to it, and it has never gotten the same treatment that other holidays (including, especially, Shabbat) have.  This probably has a lot to do with the fact that Hanukah is the latest Jewish holiday added to the calendar, in that the events that it remembers occurred most recently.  This jives with the general rabbinic understanding that, as time goes on and we move farther and farther from Revelation on Mount Sinai, the events of our times are less holy than those that preceded them (ירידת הדורות).  While this makes for a simple account, I think that, as with most instances of ירידת הדורות (lit. “the decline of the generations”), it fails to paint a full picture.

Hanukah is mentioned, in proportion to its status today, almost as an aside in the Babylonian Talmud, a vast corpus that devotes whole tractates to other major holidays (Shavuot being a notable exception).  On a single page of the Talmud the classic story of the Hanukah miracle is recounted as the reason why such a holiday is celebrated at all.  The Gemarah says:

“Where did Hanukah come from?  Our Rabbis taught that on the 25th of the month of Kislev we celebrate eight days  when it is improper to mourn or to fast.  When the Greeks entered the Sanctuary in the Temple, they made all of the oil impure, and when the kingdom of the Hasmoneans overcame them, they searched for and could only find one cruse of oil (that still had the seal of the High Priest on it [attesting to its purity]), and it only contained enough oil for one day.  A miracle occurred and they were able to light to Menorah for eight days.  The following year, these eight days were established as ימים טובים — holiday(s) — with songs of praise and thanksgiving.” (Shabbat 21b, translation mine)

This would be the end of the story, except that the Talmud is not the original source for the story of Hanukah, even within rabbinic literature proper (I am disregarding, for the time being, the mention of the Hanukah story in such places as Maccabees I and II, and the writings of Josephus).  This account of the story, as well as a few short discussions about the laws of how to celebrate the holiday (also copied in the Talmud), originate in a document called מגילת תענית, chapter 9.  מגילת תענית (lit. “the scroll of fasts” here being used almost ironically as a title, since the dates described in the scroll shared the quality of being days when one could not fast due to the festive nature of the day) is a short work of proto-Rabbinic (in that it is thought to have been compiled in the mid-first century CE) Jews detailing 36 days on which the community celebrated something having occurred in the past (approximately) five hundred years.  Hanukah is one of these occasions, but is also one of the few occasions (along with Purim) mentioned in the scroll that still appears on the Jewish calendar.

If it were not for the prevalent theory of ירידת הדורות, one might naturally ask why Hanukah is not one of the most important holidays, rather than the least, since it was (relatively) so fresh in the minds of those who canonized the Jewish calendar (at least for the most part; the calendar has continued to change, now including such days as Israeli Independence and Holocaust Memorial Day)?  Whether because the theory of ירידת הדורות has grown in strength over the last millennium, it seems that this question was asked.  Rav Nissim Gaon posits that Hanukah gets such a bare treatment in early rabbinic literature because it was such a well-known holiday and no explanation was needed.  Something about the holiday must have struck a deep chord, as the holidays commemorated in מגילת תענית were decreed to no longer be applicable in the 3rd century (allegedly because they were ‘out of date’), and Hanukah has stuck around.

I think that it is this specific combination, of reverence for the past combined with an oral history that prizes the present and only sees a need for ancient history to be recorded, that has led to Hanukah having the (demoted) place it has today.

I owe much of the above to Wikipedia (Hebrew and English), and to the Artscroll version of the Babylonian Talmud, Tractate Shabbat.