I recently learned about Women of the Wall and their struggle for equality at the Kotel, the Western Wall, the most significant religious site for Jews. Every Rosh Chodesh they go to the Kotel to pray together in a minyan (technically, a group of 10 Jewish men, but for them, 10 Jewish women.) They have been facing a lot of hostility from police/government. The Rabbinut, Orthodox rabbis, controls the Kotel and what is allowed to happen there. So this morning, was Friday and we didn’t have school, so I wanted to go and show my support…

I came early before the other women entered and filmed a little of the men’s side. They get to read Torah, dance, wear tallit and tefillin. All things the women aren’t allowed to do at the Kotel yet.

A woman who refused to take off her tallit (prayer shawl) at the Western Wall was arrested. Clearly she didn’t do anything wrong. 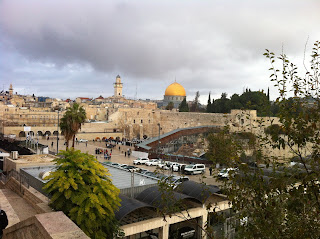 The Kotel at sunrise with rain, really beautiful. 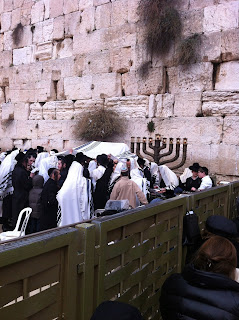 The men praying on their side, reading Torah peacefully. The Chanukia is there for Hanukkah! 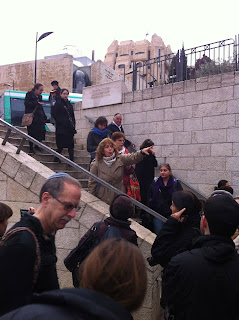 She is giving us instructions on entering. They will take our tallits, if we don’t let them, they will arrest us.

I gave them mine, they held it at the gate until I exited much later. When they took it, I told them it was really important to me, I asked the head officer if he used a tallit when he prayed and he said yes. I told him that I wanted to use it to use my tallit to pray. He told me that there is a law in Israel against women using them. And I said, “who’s law? HaShem’s law?!?! No way.” The officer laughed and smiled, but I still didn’t get to take my tallit with me. 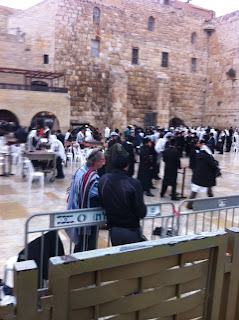 The police put an extra barrier so the men who prayed in support couldn’t stand too closely to us.

This police man was really nice to me and said good morning to me after I said boker tov with a smile. I think he liked me, why wouldn’t he? 🙂

One thing that was upsetting to me was seeing Orthodox Jewish women come up to us and tell us to be quiet and that what we were doing was horrible. But there were other women who just happened to be there and saw us gave us huge smiles and thumbs up! 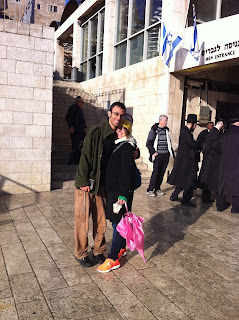 Derek came to support the women at the wall.

He prayed on the other side of the barrier next to us! It really made me feel great to see him there. (At school he is Naomi’s chevruta in Gemara, what a lucky lady!) 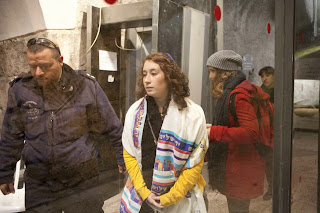 This girl was arrested for not taking off her tallit.

I talked to this guard. His name is Lior, he is SO nice! I asked him when I was leaving if he really cared about praying at the wall. And he said, of course I don’t care, I enjoyed it! (He had come into the Kotel to watch us pray too.) I feel bad for the police men, they don’t really want to be doing this.

During Hallel, special prayers we say on extra special days like Rosh Chodesh (the first of the Jewish month) Hanukkah, and other holidays. I really had an urge to dance. Most of the service, I was standing in the back on a bench. I had a good view. But when Hallel started, it was so exciting! It was time to celebrate, and Rosh Chodesh is really a women’s holiday. So it’s really important to me. Jewish women really should own it. Anyway, I was excited, and I felt like our group of 100 women was a little afraid, as they should have been because four women had already gotten arrested. But I came down off my bench and walked around the front to where Naomi and Mary Brett (two of my great girlfriends from Pardes) were praying. Some other women were swaying, almost dancing. I grabbed Mary Brett’s hand and another woman who I didn’t know and we formed a circle and away we went. We were dancing at the Kotel! Immediately more women joined! It was so exciting and for a short time I forgot we should have been nervous and just danced for God and out of joy. It’s so wonderful to dance with women, it’s so strong and carefree. But within a few seconds (less than 30) police game and told us to settle down. We were being too loud and rowdy. But it was too late. We did it, and it was amazing. The chazzan changed tunes and we went back to being quieter. At the end of hallel during Song of the Sea we danced one more time. I was a little more nervous this time. I knew the police would come. When we stopped my legs were shaking, but it was so worth it. The women left the regular Kotel area and went to Robinson’s Arch to finish the Torah service.

I was very happy too because a year ago I wouldn’t have been able to daven/pray with them. I didn’t know how, and now after being at Pardes, I felt very confident in my abilities and really felt a strong connection to what was going on and I really wanted to be there to pray, to give thanks and praise and rejoice. All things I didn’t know how to do in a traditional, productive way not a very long time ago.

The whole thing was inspiring to me. I’m sure for others it was depressing, but it gave me hope. Everyone knows I like a good fight. I felt like I really belonged in that moment at exactly that time. With exactly those people. Doing exactly what I was doing, and that was a great feeling.