Jerusalem: Pulled to a Place

Posted on December 28, 2012 by Shanee Michaelson

During the summer of 2011, I was a recovering attorney who had just completed a year teaching in Jewish early childhood education. I felt a calling towards deepening my own formal Jewish education and learned at Pardes for 3 weeks. I was exposed to the tip of an iceberg of knowledge of every imaginable sort. Intellectually stimulated and overwhelmed with discovery (of a non-litigious sort), I went a little bit crazy and decided I had to try this “learning at a yeshiva” thing for a longer term. I returned to D.C. and for 6 months immersed myself in electronic discovery as a temp attorney, working overtime to save up for the unconventional scheme of living in Jerusalem and learning full time.

Almost a year ago, I came back to Jerusalem for the Spring 2012 term at Pardes. It was a tough adjustment, especially in the first week when my housing fell through, my luggage was lost, and I had problems with the person taking care of my dog in North America. But as I have learned to do in life, I persevered. I got to know the diverse student body, including several students in the Educators Program. I delved deeper into the texts and into various personalities and opinions in Jewish history. As a weekly volunteer at the local Community Garden, I pulled up weeds and wondered why the sages used the euphemism of “pulling up plants” to designate one who has become a heretic.

There was so much to absorb and before I knew it the semester was over. I made a decision to delay my return to North America and to wait for a second semester to complete what would be “my year of learning.” I was able to stay in Jerusalem over the summer, started a small business by finding a handful of Israeli students to tutor in English, and completed a course of Hebrew Ulpan.

By the time Fall 2012 term started, I felt so at peace living in Jerusalem that many of the new students assumed I had made Aliyah years ago. This term I was able to learn new subjects such as Gemara and Halacha, as well as continue studies in Chumash, Tanakh, and Conflict Resolution. Once a week, I volunteered at an after-school program for 5th and 6th grade kids. On a personal level, I deepened my spiritual connection through prayer and made new friendships. It also turned out that many old friends were visiting from outside of Israel, which made me feel more complete here as I hosted them. Chanuka rolled around, and I felt blessed to see menorahs lit up everywhere and to spend time with a friend from high school and her husband and children in Modi’in, the place where much of the original Chanuka story occurred.

Now I stand with less than a month left to “my year of learning.” It is rather strange how connected I feel in my heart towards this place on the other side of the world from where I grew up. A place where I will never speak like a native, and where I will never get used to bus drivers who can make jokes, make change, and maniacally drive down Kovshei Katamon.

All along I’ve thought as this year as a parenthesis- as a year that stands alone and apart, a year off from my real American life. Yet at this juncture, about to leave and with mixed feelings, I wonder, was it all really just prologue? Maybe this is my real life, and North America was simply an introduction, a preface. Here is where the true story begins. Maybe I’m coming back again, Jerusalem. One thing I know for sure: I will not forget you. 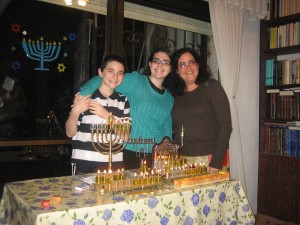