Posted on April 3, 2013 by The Director of Digital Media 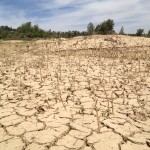 Most digital cable and dish networks in the United States have an entire channel or two devoted to the outdoors and the numerous related activities, from hunting and fishing, to hiking and camping. Israelis, although I am not able to vouch for the television coverage, certainly are committed to experiencing nature. More precisely, being outside and walking the breadth and depth of the Land of Israel is an experience that is near and dear to a large percentage of Israelis. In the week prior to the Passover holiday, the Israel Trails Committee estimated that 100,000 Israelis had set foot on one of Israel’s countless trails. Most popular among those trails are the Sea to Sea (From the Galilee to the Med.) or the monstrous Israel Trail (From Metula to Eilat). Regardless of the abilities of a particular hiker, each trail gives the trekkers the opportunity to have some up close and personal time with the land itself. Meeting fellow hikers on the trail is not to be underestimated, sharing information on routes, places for a hot shower, water, and safe camping sights. There is in fact a list of people who can help during the grueling journey on the Israel trail, affectionately named Trail Angels. In order to get a taste of the Land of Israel, it is not necessary to commit oneself to sleeping under the stars and eating canned tuna for days at a time, as there are shorter trails that can be done partially or completely over the course of a few hours, which are more appropriate for those with less time or less ambition.

Yesterday, as vacation begins to wind down, I, with a couple of friends, decided that it would be a good day to attempt a portion of the Jerusalem Trail. 42 kilometers in all, the Jerusalem Trail makes a circuit around the city, parts of the trail appear quite rural while others are close to the urban center. We joined the trail a few blocks from the central bus station along with a large school group of Arab girls who photographed every flower they passed. After some overtaking them, we spent a while on a relatively boring bike path before finally finding the “rugged” part of the trail. Picking our way over rocks in a dry river bed eventually we found our way to a reservoir which none of us knew was there, despite a combined 5 years of Jerusalem residence. Some of the water had already evaporated, leaving a crusty but still squishy surface to walk on, in which had grown the most painful hitchhikers (not to be confused with trempers). Enjoying the water were Hareidi and secular children, along with couples who had come to walk around the edge of the lake. We turned off from the reservoir and headed for several steep rocky and earthy uphill sections, which gave us a great views of the outskirts of dowtown. Our day finished with several kilometers in the Jerusalem forest and a lucky tremp to Ein Karem where we took the bus back to center city.

At times it was hard to believe we were still within the municipal boundaries of Jerusalem, while at others it felt as if we had not journeyed so far from home. At the risk of concluding with a cliche, there were a few moments during our tiyul when I had to stop and look around, almost to remind myself of having the privilege to walk the land.