[PCJE Dvar Torah] A Bridge Between – by Avi Spodek 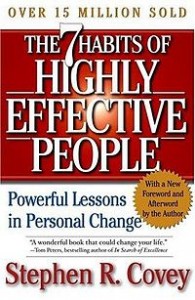 Over these past few weeks I have been reading Steven R. Covey’s The Seven Habits of Highly Effective People as part of my coursework in Jewish educational leadership. Covey’s message and delivery are inspiring, and I highly recommend to this book to anyone and everyone. Its main premise is that leaders are most effective when they are, first and foremost, committed to and guided by principles of a universal and eternal character ethic. These principles enable them to prioritize their goals and forge authentic relationships with their colleagues in a way that cultivates their talents and spurs them toward greatness. Ostensibly intended for a business management audience, The Seven Habits has implications for every individual.

I believe that a similar message regarding the necessity of an eternal character ethic is apparent in the second of this week’s double Torah portion of Achrei Mot / Kedoshim. I have studied Parshat Kedoshim many times and can still recall much of what I learned about it in high school, but Covey’s book revealed a new insight into a particular phrase from the opening of the second of the two portions. 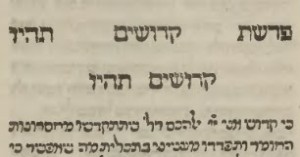 The parsha opens with Gd telling Moshe to tell the Israelites:

You should be Kedoshim because Kadosh am I, Hashem your Gd

Rashi explains the concept as follows:

Be separated from sexual immorality and from sin

Rashi uses the method of smichut to explain the concept of kedoshim by connecting it to the previous parsha, which speaks of illicit relationships. In Rashi’s reading, limiting one’s sexual promiscuity is the means to the end of being kadosh like Gd.

The Ramban (Nachmanides) picks up on Rashi’s general approach but diverges from it as follows:

…The Torah forbids illicit sexual behavior… and allows sexual activity between man and wife… So, a hedonist still has room to become obsessed with his desires, either with his wife, or many wives… One can run after his desires in a number of things that the Torah does not forbid. But by doing so, he can become a “Navel B’Rishut HaTorah” (a scoundrel within the boundaries of the Torah).

While Rashi sees the limits on sexual behavior as the means to kedusha, Ramban demands more than this. He explains how it is possible for a person to live a life without transgressing any of the Torah’s commandments while still remaining “a scoundrel”. His commentary suggests that in addition to the letter of the law there is also the spirit of the law, and that Gd wants the people to be conscious and committed to both aspects simultaneously.

I would like to offer an additional reading of this phrase that adopts Rashi’s method of smichut and offers a twist on Ramban’s concept of “Navel B’Rishut HaTorah”.

While both Rashi and Ramban look backwards for the context of this pasuk, neither seems to look ahead to the list of laws that follow. These laws, highlighted by the famous phrase of “וְאָהַבְתָּ לְרֵעֲךָ כָּמוֹךָ” (Love thy neighbor as thyself), seem concerned with a person’s relationships to others (including Gd) and develop out of the principles derived from a universal and eternal character ethic.

In this explanation, kedoshim tihiyu acts as the bridge between the previous commandments and those that follow. And it still implores the Israelites to avoid being a Navel B’Rishut HaTorah, as the Navel is someone who merely follows the laws without internalizing their underlying principles. The Torah warns against this and then provides some habits of Its own to guide the individual toward a proper ethical behavior in daily interactions.

In this vein, it is also interesting to note the connection between the Jerusalm Talmud (Nedarim, 30b), which quotes Rabbi Akiva as embracing וְאָהַבְתָּ לְרֵעֲךָ כָּמוֹךָ as one of the greatest of the Torah laws, and a tradition brought by the Shulchan Arukh, based on the Babylonian Talmud, to adopt the customs of a mourner for the first 33 days of the counting of the Omer between Pesach and Shavuot because, “Rabbi Akiva had 12,000 pairs of disciples and all of them died at the same time because they did not treat each other with respect”.

While Rabbi Akiva was a great teacher who produced thousands of brilliant students, these students failed to show the proper respect to one another. As such, all of their Torah and all of their insights became meaningless, as they lacked the principles of a character ethic to guide their interactions with others.

As future teachers, we understand that we need to ensure our content expertise and appropriate pedagogy before walking into the classroom. This parsha and this time of the year remind us that we also have a responsibility to continually work towards developing our own character ethic, as well as that of our students.