Posted on April 19, 2013 by The Director of Digital Media

When I first moved to Jerusalem, the shuk was dead at night. This made sense, since it was mostly a fruit and vegetable and meat and fish market. I remember back in 2005 or 2006 thinking that Bashar (the cheese store) could make a killing if they stayed open late one night a week for wine and cheese tasting. At the time this idea seemed ludicrous since the shuk was a ghost town at night. There were a few restaurants (and of course the steakiyot) on Agrippas. But I’d say that just in the past 4 or so years has the shuk area really become a place with a plethora of interesting dinner options. One day I hope to write a post talking about dining options in the shuk. For today though, I’m going to focus on the newest option, Jacko’s Street, which is located at the bottom of the shuk around the corner from Rachmo and Mousseline.

Jacko’s Street opened about a month ago (maybe less?), promising the finest kosher dining in the neighborhood. Before we went, we heard a lot about the atmosphere and the ambiance and of course the food. Without giving too many spoilers before the meat of my post, the atmosphere was nicer than shuk standard but nothing too special, the ambiance was a little too trendy for this grandma, and the food was really good.

I called yesterday to make a reservation for later that night and was told that they were all booked up but that we could sit at the bar – but that if we were at all late they wouldn’t save the seats for us. Because I’m totally anal I insisted we get there early, and when we walked in at 7:20 the restaurant was completely empty of customers. The barman told us to sit wherever, but then the hostess was like, no, we’re full, you have to sit at the bar. I protested, and she let us have a table. We were alone until about 7:45, when the next group arrived. By the time we left a little after 9 the restaurant was filling up but by no means full. So I’m not sure what was up with the draconian table reservations, especially since I apparently have a geriatric eating schedule.

As for atmosphere, Jacko’s Street’s “thing” seems to be old Jerusalem street signs, which adorn the wall above the bar. There’s a long bar in the middle of the room, with an open kitchen behind. The dining area is meant to be trendy converted warehouse, I think. On the wall next to each table is the top part of a grocery cart (like where a toddler would sit in a supermarket), which we couldn’t really figure out. These days I am too old, but this restaurant definitely seemed to me to be trying to be trendy and probably turns into a bar (and probably is filled with Jerusalem hipsters at hours that I no longer consider reasonable for first getting your night started … sigh). Along with the warehouse/trendy theme, the regular (appetizer and entrée) menu is a sheet of paper clipped by clothes pin to a metal clipboard, and the wine/cocktails/dessert menu is brought to each table on a tablet, where you can click and browse. I fully support the tablet menu and think they should do the whole menu that way. (I saw in the back they have drawer where they keep all the tablets). 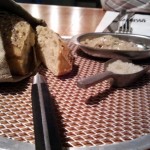 I love that the bread came in a pocket

The main menu has 24 items on it – 10 starters and 14 mains. I know this because each item is conveniently numbered in order of price. Overall, the menu seemed pretty evening split between fish and meat, with the fish split between raw/cured and cooked. For the mains, there were two vegetarian options (risotto and pasta). In general, the menu’s take seemed to be traditional foods done with a twist, perhaps with some Middle Eastern influence (a few Kurdish-inspired items, for example).

The meal began with bread served in a cloth house with a shovel of sea salt and a bowl of eggplant dip. The bread was good (not amazing), the sea salt on the bread was divine, and the eggplant dip had just the right amount of kick (but was a little smoky, which I don’t love). At this point we each ordered a glass of wine – they have a fairly extensive list and offer several options by the glass. I got the Yiron and AB had the Barkan Reserve cab. Had we been with more people (or in the mood for a whole bottle by ourselves), we would’ve ordered our favorite of the moment, Wadi Katlav by Katlav. 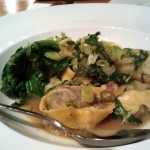 We were able to decide on an appetizer to share fairly quickly, and I think we chose excellently – Kurdish tortellini (the menu called them ravioli but they looked more like tortellini) filled with meat in a chicken broth with a bokchoi-like green. What made this special, I think, is that instead of using ground meat, they cooked the meat as you would for a stew so that it was extremely tender and falling apart and used that.

For the entrée, AB was debating between duck and lamb couscous. However, when the waitress informed us that there was no lamb to be had that day, his choice was made. He ordered the duck focaccia, which turned out to be a baguette-styled brioche in carmelized onion sauce topped with mushrooms and duck breast. I didn’t think I’d like this since I don’t eat mushrooms and the menu claimed the duck would be smoked (not my bag), but this dish was easily the best thing we ordered – the brioche was soft and sweet, the carmelized onion sauce was sweet without being cloying and gave good flavor to everything, and the duck was not all smoky but very tender. The presentation of this dish was also the best. 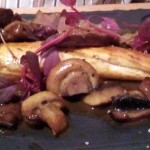 I’m a bit more boring, so I ended up debating between the fish and chips and the hamburger. The waitress tried to sell me on either of their steaks (no surprise there, they were the most expensive items on the menu.) The truth is, I love hamburgers. I’m also always curious to see how fancy restaurants do hamburgers, so a hamburger it was. The burger itself was good (and huge). I asked for it medium-medium, and it came that way. The bun was nothing to write home about. It also came with an avocado aioli dip (mild but very, very tasty), cherry tomato salad (my favorite kind of salad), and potato fries. 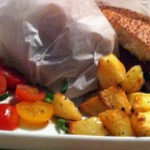 At dessert time, our experience started to crumble a little. It wasn’t too bad, but had we left right after dinner I’d have only positive things to say (aside from the reservations nonsense). After dinner, I agreed to look at a dessert menu for research’s sake. There were three offerings – pistachio ravioli, chocolate cake with all sorts of fruity flavoring, and krembo. I don’t love pistachio except in pure nut form, and I don’t believe in ruining chocolate with fruit. But I am always curious to see how top chefs can recreate popular chemical-filled desserts, so krembo it was. Unfortunately, they brought us pistachio ravioli, and instead of pointing out the mistake we ate it. It was ok, but again, I’m not a huge pistachio fan.

Also at this point, AB decided to order an aperitif. Whenever we go to a nice restaurant he orders sambuka, and we’ve yet to find a place that actually has it. Jacko’s Street listed it on the menu, but neither the waitress nor the barman was familiar with it, and the restaurant didn’t seem to have it. AB then asked for port, which they also had to look up and didn’t have. He eventually settled on a Scotch – Glenlivet Nadurra, which cost 75 NIS, we discovered when we got the bill. On the other hand, they were definitely quite generous with the amount of Scotch they put in his glass.

Overall, quite a good experience for a decent price (420 NIS, including the Scotch). I’m curious to see how they settle in as they get older. And while we were there, there was a camera man filming b-roll. We asked the waitress who he was and what he was doing, and she said he was from Guy Pines. So maybe we’ll be on tv?