Posted on August 25, 2013 by The Director of Digital Media 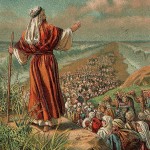 In Parshat Ki Tavo, we hear different versions of the story of the Jews leaving Egypt, once in the beginning and once at the end.

Then you shall call out and say before HaShem your God, “An Aramean would have destroyed my father, and he descended to Egypt and sojourned there, few in number, and there he became a nation- great, strong, and numerous. The Egyptians mistreated us and afflicted us, and placed hard work upon us. Then we cried out to HaShem, the God of our forefathers, and HaShem heard our voice and saw our affliction, our travail, and our oppression. HaShem took us out of Egypt with a strong hand and with an outstretched arm, with great awesomeness and with signs and with wonder. He brought us to this place, and gave us this land, a land flowing with milk and honey.” (Devarim 26:5-9)

In this version of the story we are focusing on the protecting quality of God. The Exodus story is a gentle story of salvation. The Jews went down because they needed to save themselves, and then had the opportunity to become a great nation, but unfortunately there were people out to destroy them. When they cried out to God, He was there to save them and bring them to the wonderful land of Israel. Only a few verses later, we learn about the laws of Ma’aser (tithing) where we are told that we should make sure that you have given “to the poor, to the Levite, to the convert, to the orphan, and to the widow, and they will have eaten in your cities and be satisfied” (Devarim 26:12). We can see that it is now our job to act like God did, and take care of those in our communities who need us the most.

At the end of the Parsha, Moshe comes and tells the Children of Israel another version of Exodus. This time it is Moshe telling the Jewish people, soon after they were just told all of the blessings and curses, which is what fills the majority of our Parsha.

Moshe summoned all of Israel and said to them, “You have seen everything that HaShem did before your eyes in the land of Egypt, to Pharoah and to all his slaves and to all his land- the great trials that your eyes beheld, those great signs and wonders. But HaShem did not give you a heart to know, or eyes to see, or ears to hear, until this day. I led you for forty years in the wilderness, your garment did not wear out from on you, and your shoe did not wear out from on your foot. Bread you did not eat and wine or intoxicant you did not drink, so that you would know that I am HaShem, your God. And you arrived at this place, and Sihon, king of Heshbon, and Og king of the Bashan, went out toward us to battle, and we smote them. We took their land and gave it as inheritance to the Reubenite, the Gadite, and the half the tribe of Manasseh. And you shall keep the words of this covenant, so that you will succeed in all that you do. “Devarim 26: 1-8)

This time the story is about the strength and abilities of God, about His great power to cause destruction and preservation. The Children of Israel are told to remember that Egypt was destroyed, as was Sichon and Og. And to remember all the miracles that occurred when then left Egypt, that they were saved and taken care of- their clothing stayed for forty years while wandering in the desert, that they were able to conquer land and those who wanted it were allowed to take it. And at the end of Moshe’s retelling, he reminds the Jewish people that they should keep the laws, because that is the only way that they will be able to continue to exist.

The beginning of our Parsha, we learn about how to act like God. We need to remember that God was the one who saved us from Egypt and brought us to the land of Israel. Not only do we need to show thanks to Him by bringing our first fruits but we also have to remember those in our community that need our help. By giving our tithings to them, we are acting like God, making sure that their cries our heard.

But at the end of the Parsha we are reminded about the strength of God. Yes, we are encouraged to act in similar ways of God, but we are human and God is powerful. Moshe is reiterating the power that God has- that the curses that are spelled out in detail can happen, but so can the blessings. The story is acting as a reminder of the power of God, reminding us of stories that we were part of.

But why do we have to hear the same story told twice, relatively close to each other? To remind us that we need to find balance. We have to find the ways to act like God, by making sure that we are doing what we are able, to make sure the world is working in a positive way. But we always must remember that we are doing it because of God, to make sure that we do not become too haughty. And to remind us of the great power that God does have, and that God does want us to succeed, but that can only happen if we follow in His ways.