Maybe everyone has read the parsha already, but if not, at the end there is a very short story of the Tower of Bavel. 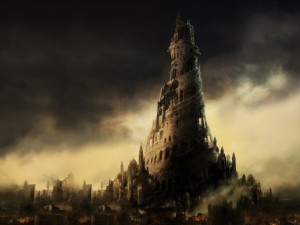 ‘Come, let us build us a city, and a tower, with its top in heaven, and let us make a name for ourselves; lest we be scattered upon the face of the whole earth.’

And so they started to build this “tower.” HaShem comes down to see what they are building, obviously doesn’t approve and then:

Come, let us go down, and confuse their language, that they may not understand one another’s speech.

And God scattered them all over the face of the earth.

It seems a little strange, because aren’t the people coming together, in unity? (There aren’t that many of them!) So they are all working together! It’s so nice, it’s so sweet!

But obviously HaShem feels differently. What is really going on? The people are unifying to create a name for THEMSELVES, not to build something to praise HaShem.

But then why was HaShem’s punishment to change their language and scatter them all over the earth?

It’s interesting that it’s about making a name for themselves, because there aren’t any actual names in the story. We have no idea who is talking to whom or who is actually doing what. They are a massive unit with no individual identities. Also, they say build a tower once, but they build an עיר/city. (the word עיר is mentioned three times in the story.) They are building a city to keep people in, not a tower to make sure that people don’t get lost. They really are a regime. They are using the same language to limit people’s thoughts and they are building a city to keep the people close to control them. What’s really wrong with regimes? They don’t allow individual thought, they brainwash, they convince mass groups of people to behave in ways so they wouldn’t or can’t act on their own accord. It’s implying an authoritarian government or dictatorship. Some famous regimes you may be familiar with are Hitler’s Nazi Germany, Communist China led by Mao Zedong, or of course, Stalin’s Soviet Union. So to avoid the rise of this regime that was forming, Hashem scatters them all over the earth and also confuses their language. So they won’t be able to control the people and they won’t be able to limit their speech.

I want to focus on language, because I don’t think language is a bad thing, and because lately, I have been struggling with them a lot. Hebrew, Aramaic, and the language of Judaism in general. Right before Rosh Hashana an article was published in Tablet Magazine, titled, Learning Judaism as a Native Language Requires More Than Synagogue Once a Year, it was posted on the Pardes facebook page, so you may have read it. It was very striking to me because I was “raised” Jewish, but I didn’t know anything about Judaism, and when I spoke to “real” Jews, I had no clue what they were talking about. This is one of the main points I wrote about in my application to Pardes three years ago. If I wrote it again, I would say that I want to be native in being Jewish.

Just like in the parsha, with Midgal Bavel, language can limit us or help us grow. As Jews, we must have a common language, be on common ground, to discuss why we love Judaism, why we think something must change, or simply why we feel the way we do, but we MUST know enough and care enough to enter that discussion. And for one thing, everyone in this room obviously cares enough, or they wouldn’t be at Pardes. We all care, we all want to be part of that discussion, and at Pardes, no one is trying to change us, no one is trying to make us part of a regime or cult. In fact, the only thing Pardes pushes us to be is ourselves, and it’s not always easy, and that comes with many challenges, but I truly believe this. So as we all continue trying to be ourselves and to find ourselves; try to find a common language, maybe in the text, in spiritual chervuta, on the basketball court, at the Shabbat dinner table.

Like anything else, it takes practice, I know..it’s my third year.

The article I talked about earlier said, “Those of you who feel that maybe religion holds something for you, some mystery you just haven’t unlocked yet, or connection to a tradition you value, think about those things you have mastered, maybe in arts or sports, that came in time, with some regular practice. Think how rewarding those things are now. Maybe religion is like that. And maybe the next time you go to synagogue, you should take a bucket of balls, and not worry if you double-fault.”

So even though it’s Shabbat, let’s keep working hard, we finally got to have our first full week of school (amazing!!), and we’ll keep studying, learning, and of course making mistakes so we can all become a more beautifully complete version of ourselves.