Posted on November 6, 2013 by The Director of Digital Media

In the past month, AB and I had occasion to try two new relative newcomers to the blocks, Gusto Italiano on HaLamed Hey and Pompidou on Emek Refaim. (The occasions were Thursday and Wednesday, respectively). They are both versions of the Italian bistro, despite the seeming French-ness of Pompidou’s name. What Jerusalem doesn’t need is more mediocre pasta; what it does need it more bistro goodness. So I was curious to see what these two guys had to say for themselves.

Gusto popped up about a half a year ago, but we never got around to checking it out because it’s located in an area that is not accessible by public transportation from where we live, and we are just so lazy and there were just too few incentives that the 40-minute walk seemed unnecessary. Then, a few weeks ago, I had an evening meeting in Katamon, so we figured it would be a good opportunity to finally check it out.

The restaurant is located in a quiet residential area, giving it the feel of a cozy neighborhood joint (not so common in Jerusalem where most eateries tend to be clustered together). Most of the seating is outdoors. Like almost every new restaurant we’ve been to in the past year, Gusto has an open kitchen – definitely a trend these days.

We had heard great things from a few friends who live in the area, so expectations were high. Perhaps too high, as I wasn’t overly impressed. I mean, everything we ate was good, but a danger of Italian places is that often I feel I can make the same thing at home without losing any of the delicacy, and, yeah.

The menu seemed promising, with sections devoted to salads, antipasti, focaccias, pizzas, pastas, and “specials” like lasagna and eggplant parm. That said, aside from a few of the antipasti, none of the descriptions dazzled.

We weren’t that hungry so we decided to share an appetizer and a pasta. To start, we got a fried potato/cheese ball thing. Now, I’m never going to dislike anything that includes “fried” and “cheese,” but it was actually kind of flavorless. We might have been better off with the mozzarella sticks proffered to the table next door, whose look and smell practically made me drool – but I didn’t try them. 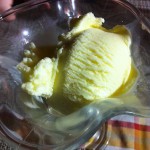 We also ordered a pasta primavera with homemade pasta. (All pasta dishes come with a choice of several pastas, some homemade and some dry). The pasta was detectably homemade, in a good way of course. The sauce was nothing I couldn’t reproduce at home. Like I said, it was totally good, but nothing remarkable.

The service was great though, and after we finished, the waiter came by to offer us vanilla ice cream on the house. The ice cream was creamy and rich and pretty much everything you’d want in an ice cream.

I feel a little bad giving a somewhat negative review since we had a pleasant experience, other people seem to really love it, we only sampled such a small selection from the menu, the service was good, and the restaurant generous. And their wine list was pretty good – not extensive but with some good selections. Prices are totally reasonable.

Bottom line: If you’re in the neighborhood and don’t feel like cooking, try it out. If not, don’t fear you’re missing out.

We had better luck at Pompidou, further solidifying my impression that whereas Emek Refaim used to be a strip of mediocre, the street is having something of a quiet culinary revolution. Pompidou, situated next to Village Green, occupies what used to be Tofinay, that bakery nobody I know ever went to. 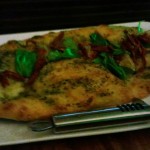 I’d been to Pompidou twice already, but never for a proper meal. Over the summer, when it first opened, a friend and I went for drinks and ended up with glasses of wine and an out-of-this-world focaccia. The most exciting wine by the glass is the Dalton fume blanc, which for some reason they have listed under reds, even though it tells you what color it is right there in the name. The focaccias aren’t focaccia-shaped, but are delectable nonetheless.

The second time, a coworker and I were bored of the usual lunch options in the area (I work in the German Colony) so we decided to see if Pompidou would do take away. They agreed, and she had a ginormous salad that came with a hearty serving of bread while I had an amazing roasted eggplant/cheese/pesto sandwich that came with a hearty serving of side salad. The bread was so soft and tasty, the flavors perfect, and the salad fresh.

These experiences made me curious to see what a proper meal would be like, and AB hadn’t been at all, so Pompidou was a clear choice when we decided one night after to work to eat out instead of going home. And it proved to be a good choice in fact.

Like Gusto, most of the seating at Pompidou is outside. The inside has a few tables and a dessert display case. It is very cute and supposedly meant to look French. They offer a few seats out front, but what I was pleasantly surprised to discover was all the seating out back, along with a bar. They’ve done up the back quite nicely, with nice Arab-style tiling. Sitting out there with the quiet and the greenery, you’d never know that a busy thoroughfare was just feet away. As an additional touch, waitresses came around to offer us red fleece blankets to drape over our shoulders in case we got cold. 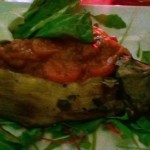 Eggplant – sorry for the blurriness

Like other Italian places, the menu is divided into salads, sandwiches, antipasti, focaccias, pizza, pasta, and “specials.” Here the choices looked fairly more interesting, with unique vegetable and sauce combos. Unfortunately for us, the most delicious-sounding dishes either had mushrooms (I don’t eat), pesto (AB doesn’t eat), or fish (AB doesn’t eat), and we’re big on sharing. (People, this is what love looks like in our family).

In the end, we opted to share a salad, antipasti, and focaccia. Actually, we tried to order their eggplant parmesan, which I’d seen other people eat and comes in a deep dish bubbling with cheese and generally looks amazing, but they were out that day. Despite that setback, what we ended up with did not disappoint at all, and by the time we were done we needed to be rolled home. (Not literally; we walked.) 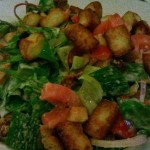 We ended up with a massive fried halumi salad (lettuce, fried halumi, tomatoes, cucumbers, and more in a creamy cheese dressing), a sun-dried tomato and basil focaccia that came with three spreads (pesto, sun-dried tomato, and olive tapenade), and roasted eggplant with stewed tomatoes and buffalo mozzarella. Everything was very good. The focaccia was as good as I remembered and didn’t even need the spreads – the flavoring they gave it was sufficient. The eggplant seemed to be an Italian twist on a standard Middle Eastern dish, though my one complaint would be that I wish the buffalo mozzarella had a tad more of a kick (it was very plain).

We were stuffed so we didn’t sample dessert, but word on the street is that they’re amazing.

Prices are reasonable – we paid about 200 NIS for the three dishes and two glasses of wine.

Bottom line: When you’re in the mood for a rich, indulgent meal, Pompidou’s your place.