A Bris to Remember

Posted on November 18, 2013 by Nataliya Naydorf

It was odd telling family and friends back home that I was excited to go to a Brit Milah.

“I just can’t wait to witness a circumcision!” never seems to resonate well with most people for some reason.

In truth, while I was excited, I was also apprehensive. Prior to the ceremony, our Chumash Level Aleph class had received a crash course in ritual circumcision from Hayim, the unofficial Pardes moyel, and though I felt that I had a better understanding of the process, I was still anxious about watching the removal of a baby’s foreskin.

To his credit, Hayim never fled from any question, no matter how uncomfortable or awkward.

“What about the recent outbreak of herpes in infants?” I had asked Hayim frankly and he didn’t pause or flinch as he explained Hatafat Dam Brit, the necessity of the blood to be withdrawn after the removal of the foreskin, and that it could be performed in ways other than direct contact between the mouth of the moyel and the baby’s penis.

We learned that gauze or a pipet could and should be used instead to minimize the risk of infection.
We learned that the baby should never be put at risk for the sake of a circumcision and that everything should be properly sterilized.
And I realized that perhaps this wasn’t going to be as scary as I thought it would be.

A part of me was worried that it was going to be a macabre scene of baby blood and gore, coupled with an irrational fear of rogue foreskins flying out of control and attacking attendees (okay not really), while another part was looking forward to the cultural experience. Because even though it is part of Jewish tradition, it was not something that I grew up hearing about or witnessing. It’s not something that Jewish baby boys in the Soviet Union went through. And because of that, I felt like an outsider looking in and observing a tradition that was supposed to be mine, yet seemed so foreign.

Prior to the event, I had never given much thought about the process of circumcision. In everyday conversation, it would only rarely come up in the form of crude jokes with friends. But the day before our trip to Alon Shvut, I found myself thinking about circumcision and whether I would choose to circumcise a future son. Would I want a ceremony celebrating this event? What did it even mean to me, if it meant anything at all? 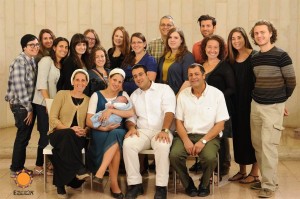 When we arrived, Tovah Leah beamed as she greeted us. I had never seen her so happy. Her positivity was surprising and inspiring in a way I couldn’t really understand at the moment.

As our class entered the shul, I decided that I wanted to get as close as possible without being obnoxious. I wanted to face my fears and knew that if I ever wanted any future children to go through this ceremony, I should be able to stomach it. I should be able to watch and accept that a baby’s foreskin is being removed and that blood must be drawn out. And while I knew that it was another person’s child I was watching, I felt and hoped that my empathy would aid me in determining exactly what I felt about this practice.

Yet, as people started to sing and recite blessings, I looked over the crowd and I could see the importance of this ceremony to the people in the shul. The baby was surrounded by an enormous, loving family, along with three great grandparents in attendance.

Propped on a pillow over what appeared to be a briefcase on his grandfather’s lap, the baby cried momentarily as he was undressed from the waist down. His tiny legs kicked out before being held down by his grandfather in preparation for the circumcision. I watched as the moyel bent over the baby, his hand movements quick. He moved back and forth between his instruments and the child, and in those moments when he would step away, I didn’t see any blood and the baby was quiet.

And then it was over. Just like that. The baby was bundled back up, pictures were taken, hugs and kisses were exchanged, songs were sung and a baby boy was welcomed into the covenant.

While I recognize that perhaps not all circumcisions are like the one that I witnessed, I can’t ignore that the Brit Milah that I had the honor of attending was a positive, spiritual experience that allowed me to view a perspective on Jewish life and traditions that I had never before seen in such an intimate way.

The mixture of feelings that I initially had about the event dissipated as I witnessed these personal moments between the members of Tovah Leah’s family. What was left was a warmth that resonated with my own desire to create a similar loving and traditional Jewish home life for my future family.

While I continue to struggle and come to terms with my own spirituality, it was important and meaningful for me to witness that this tradition could be done with so much love and compassion in a clean and sterilized environment that ensures the safety and well being of the child. And because of this, I am grateful to Tovah Leah for allowing our class to be a part of such a special event and for giving me the opportunity to catch one of the very first moments of a Jewish boy’s entrance into the covenant and into the Jewish community.

It’s a perspective that I will never forget.

Disclaimer:
This post does not reflect the experience or opinions of anyone in Tovah Leah’s class but my own.