A Piece of the Greater Whole

Posted on December 2, 2013 by The Director of Digital Media

A video produced by The Sderot Media Center.

If you watched the video, you will see that it has been edited and the events don’t occur exactly in that sequence. However, from what I heard today, the experience is not so far from the scene depicted in the video.

Today, as a part of The Social Justice Track at Pardes, I went to Sderot, a city in the Western Negev, about a mile away from the Gaza Strip. Sderot was founded as a transit camp in the 1950s as a place for new immigrants coming to the state. Busses brought immigrants to Sderot, promised them that they were not far from Jerusalem, and drove away leaving people with little to no support. The immigrants lived in tents and temporary housing until housing projects were completed around 1955. In the 1990s, Sderot also absorbed a large population of Jews from the Former Soviet Union, doubling it’s size, and was formally declared a city in 1996. 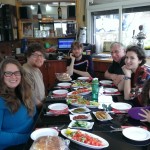 Our group at Lunch in Sderot

When we first arrived, we took care of the most important thing, lunch. A couple welcomed us into their restaurant with plates upon plates of delicious food. Literally, my mouth is watering as I type. As we ate, the couple told us about their life in Sderot. They both immigrated from Morocco and met in Israel. They were amongst the population that were promised a life near Jerusalem. Rahel told us about how she loved living in Sderot now and couldn’t imagine living anywhere else, but that all of her family had received higher education degrees and left. She told us that Sderot has a very high religious population

and that Shabbat is such a pleasant experience, that boys come from all over the country to learn in the yeshiva there, and religious life was great.

From there, we went to the office of the Sderot Media Center and met with four women. The first woman was Anat ben Amit, originally from Gush Kativ, which is a story in and of itself. She was relocated to a kibbutz near Sderot with her daughter in 2005. At first, she was in denial – of a lot of things. She was in the middle of a divorce and was being relocated from the only place that she had ever known, the place that she built her life, the place that her daughter was born in. She began to accept her reality and now loves where she lives. (She mentioned that her daughter didn’t even want to leave for a vacation.) She spends her time working in a clinic helping patients with Post Traumatic Stress Disorder. “Therapists have the same trauma as the patients, though. Nobody can escape it,” she said. At the end of the day, she thinks that the thing that will remove the stress from you is by helping another person and that’s what she’s dedicating her life to. 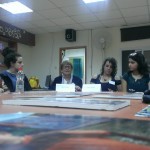 The Panel at Sderot Media Center

Next, we heard from Adele Rubin. Originally from South Africa, Adele has been living in Israel for many years, but Sderot for 4. She spoke to us about the NGO that she is involved in called Mezach, which is an acronym for Center for Social Rights (מרכז זכיות חברתיות). She told us that it’s a very diverse group of people helping the residents of Sderot to realize the Civil Rights that they have and to obtain them. Also, they help the immigrant population to integrate smoothly into Israeli society and empower the community to make change a reality. Sderot is a very poor community, with only factory jobs, forcing educated people to leave for work. The immigrant populations are hesitant to integrate into society and don’t learn Hebrew. Many people don’t have cars yet, the bus system is incredibly unreliable. Why would anyone choose to live in Sderot under these conditions and how can current residents be successful? That’s what Mezach is trying to change.

The third woman that we heard from was Noam Uzrad, a law student at Sapir College in Sderot. Originally from the Galil, her earliest memories are running into shelters because of rockets being fired from Lebanon. She knew that if she left rockets in the North to come to rockets in the South, that this was a problem that all of Israel was facing and that everyone was responsible. “When you’re a citizen of Israel, you’re not just a citizen of one place. The country is too small for that. You’re a citizen of Israel. If you choose to live here, it’s a full choice. You need to decide if you’re going to stay or you’re going to run. I chose to stay.” She volunteers to help people realize the social responsibility to the people in Sderot and lives in a special student village that is part of an initiative to get people to move to Sderot. “The saddest part about life in Sderot is that people have gotten used to the lifestyle here, but everyone stays and the story doesn’t get out. The community doesn’t raise it’s voice enough, because they think that it’s normal,” she expressed.

Maybe at this point you’re wondering what the big deal is. Why did we travel for 2 hours to come listen to some women speak about the place that they lived in? Due to Sderot’s location – at the narrowest place, Sderot is 840 meters from Gaza – they are under constant rocket fire. Since the Second Intifada in 2000, over 26,000 rockets have fallen in Sderot, alone. We took a walk to the Police Station with the fourth woman, Sivan, who has always lived in Sderot with all of her family and is now going to Sapir College. Sivan showed us a mere fraction of the rockets that have fallen over the last 13 years and explained to us that the rockets are homemade in Gaza from telephone poles and water pipes and the explosives are made from sugar and fertilizers that Israel delivers daily to civilians in Gaza who need these materials for survival. What is dangerous isn’t the rocket’s direct hit, but instead the shrapnel of knives, glass and other metals that flies in a 100 meter radius from within the rocket’s barrel. 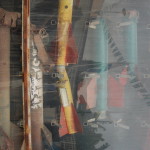 When asked why the rockets were different colors, our guide told us that the different colors signify who sent them. Once, Al Qaeda sent a rocket that landed in Sderot, injuring many, and Hamas got the credit for it. Thus, the groups decided that coloring the rockets would be the best way to distinguish them so that each group could get proper credit for the damage that was done and so that the financial supporters would have numbers to utilize when determining how much funding each organization got. With a background in fundraising, I couldn’t comprehend the backwardness of the whole thing. At Hillel, I would report to the board that there was a 20% increase in students coming to programs on Thursday nights with food involved and they would allocate more funding to those types of programs. Here, Israel would report that 36 green rockets fell injuring 40 people and killing one and Hamas would get more money to build more rockets?

Last year, during Operation Pillar of Defense, Sivan fled to Jerusalem. After rockets rained down, sometimes 100 per day, she thought that Jerusalem would be a safe place. “Denial is such a small word to describe the situation that I was in [when I heard the siren on erev Shabbat in Jerusalem],” Sivan explained to us. Everyone always said that a rocket would never fall in Jerusalem, and when she heard the siren, she was paralyzed with fear.

As we walked around, we noticed that not a building was broken, not a tree looked out of place. For a city that is hit so frequently, how is this possible? As soon as the rocket hits, government sponsored construction workers are there within the hour to repair the damage. If a family needs to be relocated, the government pays for a hotel. If medical services are need, the government takes care of them – physical or mental. The town doesn’t want to live in fear, doesn’t want to be stuck in the past. They want to live in a positive environment, moving forward. The only “scar” that is left is a small scratch on the school created by a direct hit of a rocket. The entire school was built as a shelter and they left this one reminder to children so that they know that even if a rocket directly hits us at school, we will be fine. 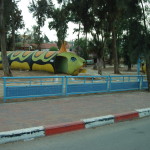 We noticed that all of the bus stops and bomb shelters were colorfully painted and asked if people frequently come to Sderot to do “Mitzvah Projects.” Expecting to hear that the residents of Sderot don’t like to be viewed as victims, who are in need of tzedekah and help, I was pleasantly surprised to hear Sivan say that people love it. People of Sderot love to see that outsiders have heard of them, that they want to do something about what’s happening, and that they will report back about what they saw and what they did. Often times, as a person passionate about social justice, I feel awkward about documenting my social justice experiences with a camera, sensationalizing poverty in a weird tourist way. Sivan told me, please, take pictures. Take as many as you want. Post them and tell people about Sderot – people will be happy to see you.

Our tour ended at a lookout point, where we could see Gaza in the near distance, towers of the Ashkelon power plant a little further, the play grounds of Sderot in the immediate distance and somewhere, beyond hills and fields was Jerusalem. As we turned to face the Holiest Place on Earth to daven Mincha, Meesh, our teacher (and so much more) beautifully pointed out, “There’s something deeply symbolic about turning your back to Gaza and davening toward Jerusalem.”