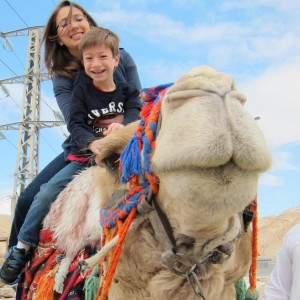 I start every personal statement with some variation on the same story:

One afternoon in high school, I came home to find my two-year-old brother running around the house, screaming the Shema. Earlier that day, Jacob had learned the prayer in preschool, and now he was yelling it, laughing it, dancing it, while running circles around the house. Ever since I was Jacob’s age, I also found a special connection to the Shema, although I expressed it very differently. Before every piano recital, after every frustrating moment, and in every sudden burst of happiness, I would sit down, cover my eyes, and pray silently, forcing myself, and perhaps even God, to listen. On that afternoon, with Jacob running around, screaming that command to listen, we’re all praying to the same God, I began to realize that I wanted to devote my life to finding those connections between Jews with radically different views about God. If a bookish teenage girl and a hyperactive three-year-old boy could find the same connection to God in just one prayer, I found, it could be possible for anyone to find some sort of connection to God, whether through prayer, study, action, or every day life.

A few years later, I have realized how hard it is to aspire to be a Jewish professional, especially as a liberal, observant, egalitarian-oriented female. Many of my days end with frustrations about why I just spent the past ten hours staring at a few sentences that argue why a certain rabbi said a certain word instead of another certain word, pertaining to the marriage of twelve-year-old girls two thousand years ago. Oftentimes, I find myself whining about how no one cares and no one understands my perspective on Judaism. Recently, I’ve spent some time researching the qualifications for veterinary school and wondering if that would be a better, more straightforward option for my future. And then I remember Jacob.

The summer after I started becoming more observant, my family took a vacation, where we all shared a hotel room. Whenever I tried to daven silently, so as not to disturb anyone, Jacob would ask me to “sing out loud.” If I muttered to myself or davened too quickly, Jacob would again demand that I pray so that he could hear, and I slowed down. I tried to pick tunes that he would recognize from religious school, and sometimes, he would sing along with me. When I began to observe Shabbat, Jacob wouldn’t take “Sorry, but I don’t use electricity on Shabbat anymore,” as an answer. He needed to know why. “Mom’s Jewish, Dad’s Jewish, and I’m Jewish,” he said. “If we can drive on Shabbat, why won’t you?” I found myself answering hard questions and trying to find ways to make my answers resonate, ways to open a six-year-old up to just beginning an awareness of the different ways that people approach Judaism.

Later in the summer, I was studying Parashat HaShavuah, and Jacob was in awe of the massive size of my JPS Hebrew-English Tanakh. “Wow, what is that?” he asked. “Read me what you’re reading!” I read him the parasha, something from BaMidbar that involved a lot of lists and a little story. Somehow, he was hooked. For weeks afterwards, he would ask me to read to him from the “big brown Jewish book” every day. I read him the Jacob saga, and he marveled at how he, too, wrestled with God on a day-to-day basis. He dreamed along with Joseph, and he wondered at Bil’am’s talking donkey.

When I traveled home last week, Jacob immediately asked me to read to him from that big, brown book, and the first thing he asked for was the story “right after Moses.” He wouldn’t listen to any other story I proposed. Although I personally have trouble with the book of Joshua, I decided to read him the first chapter, and I realized that the Joshua has a lot to offer a little boy who spends his free time pretending to be a ninja, pirate, or warrior. Jacob was fascinated with the strength of the people Israel, the way that their physicality connected them with God during their conquest of the land. Not only was Jacob impressed, but after my dad overheard my reading of Joshua, the two of us stayed up for a while discussing the geographical implications of the book, and then discussing what Jewish text comprises of, and what that means for us. At the end of my stay, Jacob asked me if he could keep the big, brown book, and of course, I said yes.

At Pardes, I often get caught up in debates about the sacrificial details of the Temple, why I should or should not wear tefillin in the mornings, or why this or that verb appears in the Pi’el rather than the Hitpa’el form. I sometimes wonder about why I’m in Israel and what I really have to teach the Jewish world. Whenever I spend time with Jacob, however, I know what and whom I’m striving for. When this kid begs to light the Chanukah candles, smiles because he knows the words of HaMotzi, and begs to hear a Jewish story, I know that I’m studying in order to find every way possible to bring children like Jacob – really, children of every age and background – closer to God. Even more, whenever Jacob triumphs at a new wrestling with God, he inspires me to keep on my track towards creating as pure and enthusiastic of a personal relationship with the Divine as my seven-year-old brother.