Together in Paris.  That’s what Anastasia’s grandmother says to her before their family is torn apart in the hit animated feature film Anastasia (which is not actually a Disney movie).  It’s on the necklace the young girl wears through to adulthood and it helps her reclaim her true identity as heir to the Russian throne.  Paris is the place where Anastasia learns the most about her roots, her culture, and the life relationships she considers most important.  Surprisingly, Paris fulfilled much of the same role for me on my recent Chanukah trip there, minus the whole finding long lost family members and the princessship of course.  And the Together in Paris part may not have much to do with my grandmothers back home in Milwaukee, Wisconsin, but I did meet up with a fellow Pardesnik in Paris, reuniting in that fabled and almost fantastical city.

I’ve been in Israel for just about one year, living in Jerusalem, Tel Aviv, and Jerusalem again.  Around Chanukah time, I was starting to catch some cabin fever; I was ready for a break from Israeli culture and so excited for a week in Paris with an old friend from my middle school days.  I guess you could say that my reconnecting with an old friend was like the animated Anastasia’s journey to find a forgotten relation, but that’s a stretch.  The real reason I even brought up Anastasia at all was because I, like her, realized just how important the place that I was coming from when I entered France was to my identity.  After a week in Paris, I was simply itching to run back to Israel, where the only crepes in sight are at the frozen yogurt place on Ben Yehuda Street.

Don’t get me wrong, Paris was incredible.  But nothing beats the feeling of arriving at Ben Gurion and feeling like I was home once again.  I’m getting ahead of myself a bit though.  Why did Paris have this effect on me? What possibly could have happened in one week’s time to make me completely forget my cabin fever and fall back in love with the country I had left?

For starters, celebrating Chanukah in the Diaspora after the holiday had already started was difficult.  I went from lighting candles every day to struggling to light at all.  The girl I was staying with in Paris was Jewish, but her connection to the culture and religion was not strong, as she herself admitted.  I felt awkward asking her to light Chanukah candles in her apartment, because I was worried about the reactions of some of her friends.  It was truly strange to say the prayers quietly under my breath and hope her friends wouldn’t laugh.

How Paris does dessert!

Second, pork is everywhere in Paris.  It’s hard to keep kosher and it’s even hard just to be a standard vegetarian.  I don’t keep kosher, but I do avoid shellfish and pork, so it was just a little tricky navigating the French culinary scene.  I did, however, have some amazing crepes and quiches, so there’s no real complaint here.  I guess it just helped me appreciate how easy it is for me to buy kosher food in Israel without thinking. 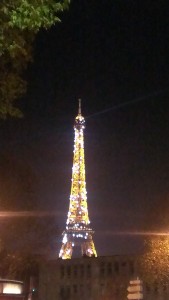 Third and most importantly, it was the connections I formed with Israelis and a fellow Pardesnik in Paris that helped me to realize how much I longed to be in Eretz Yisrael once again.  A few weeks before the vacation, Alisa Wills from the Elul program was staying at my apartment in Jerusalem.  We were talking about our plans for the Chanukah break and we figured out that we were both coincidentally going to be in Paris at the same time, Alisa with her mom and myself at a friend’s apartment.  We made tentative plans to meet up, but I didn’t think too much on it at the time.  I knew that there was sometimes a big gap between planning schedules out for vacation and actually being able to meet up with the craziness of travel.  As it turns out, we did meet up and toured some of Paris’s most famous sites together.

The bridge carved with faces of drunken nobles

One night, as my host had to run to wait tables at the local café where she worked, Alisa and I met up not far from the Notre Dame.  From there, we headed to a famous bridge on the River Seine, a bridge carved with faces of drunken nobles enjoying themselves at a king’s party.  Nearing 10 O’clock on a freezing Paris night, we made our way to the Eiffel Tower.  After seeing the Tower sparkle from afar (quite literally), we joined a crammed elevator heading to the top of the 324 meter tall building.  There, at the top of the most recognized man-made structure in the world, Alisa and I talked about Israel, about life, about Pardes, and just about everything else as we struggled to stay warm.  It amazes me how Pardes brings people together for such short times and yet of out that environment comes strong friendships.  I met Alisa’s mom and heard about a free walking tour they partook in earlier that day, a tour that easily became one of the highlights of my own vacation the next day. 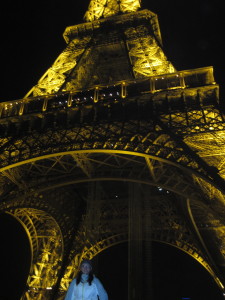 Me (left) and Alisa (right) in front of the Eiffel Tower 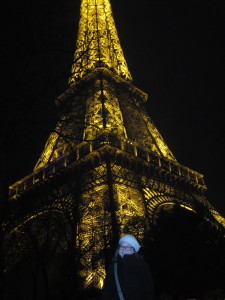 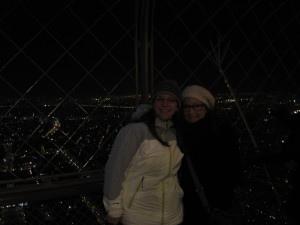 100 stories up! Pardes reunion on top of the Eiffel Tower

On the walking tour that Alisa told me about, I met a young Israeli woman who just finished Sherut Leumi who just so happens to live 10 minutes away from me in Jerusalem.  The first few minutes of the tour when the tour guide asked us from where we came were awkward; I am always hesitant to bring Israel into the picture in parts of Europe where I’m not quite sure how people will react.  I chose to say that I was visiting from the United States, casually leaving out the part about studying in Israel for a year.  The girl immediately to my right was loud and proud about her roots however; she said Jerusalem with such confidence that I felt a little ashamed for not mentioning it myself.  After this experience, I really believe the world is a quite a small place, for how else could old and new friends from the same country all end up randomly in France together?  My new friend and I exchanged Israeli phone numbers and even friended each other on Facebook (the only official way to be a friend with anyone of course) and made plans to meet up for Shabbat back in Jlem.  We went out with a big group for drinks the following night, talking about the differences between France and Israel and helping me practice my broken Hebrew.  Although I had been away from Israel for less than a week, it was refreshing to hear Hebrew and talk about life back in Jerusalem.  Once again I was astounded at the instantaneous connection I had with someone simply because of our shared heritage.

I left France ready to return to Israel, not because I had the refreshing break I had thought I needed, but because the trip reminded me how much I hadn’t even needed to leave at all.  I was expecting the weather to be a bit nicer than that of France, but I guess we can’t have everything (it’s actually a little worse).  I’m excited to be back in Israel and back at Pardes, learning and hopefully forming more of those friendships that result in chance meetings across the globe and more.  Like Anastasia, I thought I was heading to Paris to leave behind, even for a short time, a big part of my present cultural reality.  And just like Anastasia, I found that there was a little bit more truth in that reality than I had once thought.