Posted on January 7, 2014 by Cara Abrams-Simonton

Daniel Roth presented our ‘Judaism and Conflict Resolution’ class for Jewish Educators with this assignment, and below is the modern ‘Third Story’ that I wrote about Jacob and Esav:

Mrs. Rivka teaches 7th grade Tanach. There is a young man, Esav, who is the class clown, captain of the soccer team and a bit of a bully. Mrs. Rivka happened to share an office with the soccer coach, Mr. Yitzhak who also teaches health. Also on the soccer team is Mrs. Shmuel’s favorite student, Yaakov, a soft spoken, socially awkward lover of Tanach. He excels in her class and drags the soccer team down any time he plays… Mrs. Shmuel is responsible for coordinating the team for a Tanach competition amongst the regional schools. To qualify for the team students must compete against a class mate in a jeopardy-like challenge to test their knowledge of facts. Students sign up for a specific slot without knowing against who they will be competing. 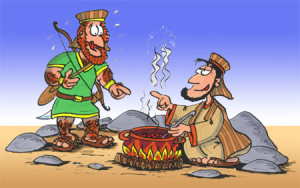 When Mrs. Shmuel sees that her favorite student Yaakov is going up against the big bully Esav and is worried about how Yaakov will feel competing one on one against Esav because of the social dynamics, but feels hopeful that Yaakov’s confidence with the text will help him to feel strong sitting across Esav. Mrs. Rivka is concerned that even though Esav is a bully and a jock, that he is also a strong Tanach student, and that he may win the competition and take away this confidence-building opportunity from Yaakov.

As Mrs. Rivka prepares her questions at her desk, Mr. Yitzhak came in to grab his student files, and says, “who is competing today?” Mrs. Rivka hesitates and responds with an attitude, “Can’t you see that I’m busy right now Mr. Yitzhak!?” because she doesn’t want him to know about Yaakov and Esav competing, since she is uncomfortable with the feeling she is having that she might let Yaakov win if Esav appears to be winning… because she believes that Yaakov needs the confidence he would get from participating in the competition, whereas she thinks that Esav doesn’t need the confidence, since he’s already good at soccer…

Mr. Yitzhak sits outside in the bleachers reading over his student’s academic standing, and sees that Esav is failing in most of his classes, with the exception of Tanach which surprises him. He is worried that if Esav gives up in Tanach, he will give up in all of his classes and therefore fail out and be forced to quit the soccer team. Mr. Yitzhak thinks about how he hopes that Esav will succeed in his competition with a peer so he can join the team to compete in the regional tournament. In the end Mrs. Rivka in fact decides to sway the results in Yaakov’s favor, ironically when answering questions about Bereshit 25, Esav’s loses his focus in Tanach and fails out of school, and therefore must quit the soccer team.