Kiddushin and the Queers

This week, a classmate of mine at Pardes wrote a blog post about Kiddushin, being a gay man, and how he might see this tradition actualized in his own future relationship.

Our beliefs and practices are informed by Orthodox Judaism, and it is important for Emet and I to have a traditional Jewish wedding as much as possible because we recognize the importance of tradition. That being said, we know that under Jewish law, our marriage will not be valid. So, we are having many discussions about which Jewish traditions we find appropriate and relevant to us and which ones we need to alter or eliminate all together. 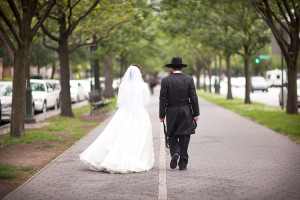 Traditions of a Jewish Wedding Ceremony:

How we as a queer couple want to maintain tradition:

What I’ve learned about Jewish tradition is that while we have customs that are passed down through history, each generation has changed them to be more relevant to their lives. You may not hear this from observant Jews, but even their practices have been informed by the commentators of a generation ago, and it is important for Emet and I, as a queer couple who wants to maintain tradition, to figure out a way to keep important aspects of it present in our wedding ceremony and our life.

There has been much discussion lately about religious GLBT people. Who we are, how we balance religious practice and being queer, and how we relate to each group (religious and GLBT people), as though they are separate identities. I’m very lucky that I can be an active member of both communities and that there are many, many queer Jews out there doing the exact same thing.

Cross-posted at Two Frum Queers, where we are writing about our experiences being Jewish, queer, and getting married.