The Strangest Kiddushin of them all 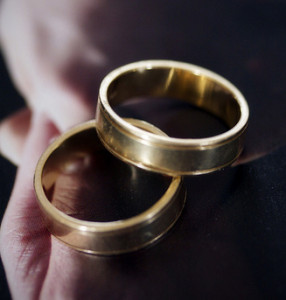 I’ve been learning a lot about traditional Jewish marriage this semester. In Gemara classes on tractates Kiddushin and Ketubot, we’ve been talking about how a man betroths a woman and what the language of the Ketubah indicates about their rights and obligations. There are also more esoteric topics: A man can encourage a woman to accept his kiddushin by showing her that he possesses a field of a certain value — but if the field has a large ravine in it, how does that change the value of the assessment? If a man’s wife is captured, he is obligated to retrieve her from captivity — but if she’s captured multiple times, does this agreement extend without limit?

On the last day of fall semester Gemara shiur, we read an interesting baraita. We’ve been talking recently about conditional forms of Kiddushin — statements that a man can make when he betroths a woman to delay the betrothal or make it contingent on the fulfillment of some action. Suddenly, in the middle of a section discussing one of these scenarios, a case is brought in which a woman speaks.

[A woman says to a man:] “Sit with me in companionship and I will be betrothed to you. Entertain me, dance before me, build me a house.” [This action] is assessed. If it has in it the value of a pruta, she is betrothed. If not, she is not betrothed.

Women’s voices do occasionally appear in the Gemara, but we hadn’t come across any this semester until that last day. My class was excited about this development. We are about 12 people of all genders, and our teacher is a woman. Learning a section of the Talmud in which a woman’s voice appears is hugely validating for Pardes’ egalitarian educational mission, and for us, it was also refreshing to get a glimpse into the life of women at the time the Gemara was composed. Adding to the novelty, this woman seems to care about elements of marriage much more compatible with our modern notion than anything else we’d seen. The men we read about throughout the semester mainly see marriage as a financial arrangement. This anonymous woman is mainly concerned that she enjoys the company of her future husband.

Now, there’s nothing halachically revolutionary about what the woman here is saying. The man is still the active partner in the kiddushin process (she speaks in the passive voice), and it’s implied that he would still make the standard betrothal statement to her after this agreement was arranged. But what’s notable here is the social reality presented that women could, and did, initiate kiddushin arrangements in the time of the Talmud.

Among the predominantly Orthodox faculty at Pardes, the discussion we were having about this baraita is mainstream. Even among the general modern Orthodox world, the idea that ancient Jewish women had more influence than our texts seem to indicate is not as dangerous as it once was. This is a new phenomenon in the past half-century, and my female teacher’s generation was one of the first in which women could be teachers of these texts at all. Nowadays, there even exist Orthodox institutions in which women are trained as leaders in halacha. That’s progress.

In our classes, we recognize the misogyny of our tradition on a daily basis. Recognizing its heteronormativity, however, seems like such an insurmountable challenge that we don’t even talk about it. Regarding queer Jewish teachers of traditional text, there’s a growing number of queer Ph.D.’s in Jewish fields and a formidable cohort of queer rabbis, committed to halacha, who have received their ordinations from JTS, the Ziegler School, or Hebrew College. In the Orthodox world, however, the door to the rabbinate remains closed and might remain so forever. (The few gay Orthodox rabbis have come out after their ordinations, and I’m not sure that this is a solution to advocate in good conscience.)

As a gay man, it’s been strange to learn about kiddushin and ketubot this semester. The kiddushin-like ritual I would do at my wedding, a mutual one between two men, is way crazier in the minds of the rabbis in the Talmud than any of the bizarre kiddushin scenarios they envision. Still, I think I’ve absorbed some of their thinking about the essence of this action and this document. Maybe my wedding ceremony will make use of kiddushin language. Maybe my ketubah will look and read a lot like my grandparents’ do. And when I want to return to Pardes for a sheva berakhot (as an alumnus did this semester), maybe my teachers will help me modify the language of these blessings to reflect the fact that I’ll be marrying a man.

In theory, Pardes has nothing against hiring an LGBT faculty member, someone who would be well suited to the task of helping LGBT students adapt traditional observance to their identities. I have to believe that someday, a queer talmud Ph.D. will sit in a classroom at Pardes and lead a discussion about homoromanticism in the talmudic stories of Resh Lakish and Rav Yochanan or about investing Jewish partnership contracts with the same force as a ketubah. Someday, these discussions will be just as mainstream as the one that we had about this feminist baraita. I have to believe this, because if I don’t, then what am I doing here?