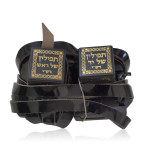 My plane on the runway at Ben Gurion International Airport, I’d just realized that I’d forgotten my tefilin (phylacteries) in Jerusalem.

calm down. you’ll deal with this.
think about it — lots of people in the group will have their tefilin with them…

My internal voice of reason was reassuring, but I felt discontented. Wearing somebody else’s tefilin wouldn’t be the same as wearing my own. Still, I accepted the fact – my tefilin would not be with me in Germany. 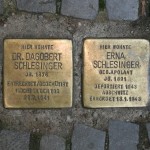 Berlin. Historic. Modern. Cultured. Alive and
Seductive.
I hadn’t come for this.

And lest
I felt too comfortable walking down the street, taking in the architecture, graffiti and monuments, the ubiquitous stolpersteine (stumble stones) below my feet would sooth my guilt – after all, the city herself
remembered.

On Shabbat, an orthodox Jewish man explained to me that he’d moved to Berlin for the music scene. A violinist, he was building a life for himself in Germany – the lack of kosher food was no deterrent.

Every morning, I wore my roommate’s tefilin.
What a mentsch.

I’d never heard a tour guide
Or should I say every single tour guide
Speak so correctly, sensitively, with such nuance, such
Insight –
Don’t they feel Anything? What are they thinking about? Only 1% of Germans resisted the Nazis. Every official tour of the Memorial to the German
Resistance begins so.

Once, I traveled to Poland to visit the death camps, but apparently I’d flown into Berlin (without my tefilin) to visit the Germans… and I liked them. This didn’t surprise me – I was only surprised by
how much
I liked them.

My arm tefilin are tied in the Sfard style,
My roommate’s tefilin Ashkenaz
So I’d wear his arm phylactery upside down on my bicep in the mornings in order to wrap his tefilin in the way most
familiar to me.

I’m proud of being Jewish. of being Israeli. being American. The meaning of my last name.

Our German guides weren’t proud of being German – they’d never considered this before we pushed them for an answer. We’re just people, they said.

Just people who lead groups of Jewish visitors around their home country – to camps, museums, cemeteries, memorials, churches and synagogues, community centers and academic institutions. Just people who happen to be very familiar with German Jewish history and culture.

And I’m just a guy who wears tefilin.