It’s all just a power struggle

No matter how the wind howls, the mountain cannot bow to it.

What Being Jewish Means to Me
By Sam Stern

I think it’s safe to say that we’ve all written this essay before. It probably talks about receiving Hanukka presents, eating matza balls, playing with your friends at temple, and watching Prince of Egypt. These are all great things but, far too often, they lack substantial meaning. If we, way past bar/bat mitzvah years, were asked to write the same essay, how much would it differ? (Insert obligatory pew report comment here).

A couple of weeks ago, I had to write a letter to the Beit Din about why I want to be Jewish. Unfortunately, I was told that leaving it at “so I can partake in the whiskey l’chaims right after shacharit and make Jewish babies” wasn’t going to cut it. So I took my Jewish resume and turned it into semi-coherent sentences. And let me tell you, there’s nothing worse than having a poorly written “letter” read out loud to you. In any case, I’ve been thinking about this question for awhile. Why am I at Pardes when I had the opportunity to start receiving an income this year? Why have I decided to “re-convert” through the Rabbanut when I could have just left things as is and not sell my soul to the devil (don’t tell the rabbis I just compared them to the devil…)? Why be Jewish?

During the Pardes intersession, I traveled to Hawaii with my family. Before departing, I thought about all of the practices that I’ve started to take on while in Israel and debated for awhile about which ones I wanted to maintain during the week I was away. After many conversations with other students and my teachers, I decided I was going to actively not follow these practices. One of my teachers put it best: “So basically, this is your bachelorette party before officially converting?” There may not have been any strippers (aside from all of the man-butts walking around in Polynesian garb) but I did fly back with a deeper understanding of the commitment that I’m about to make. 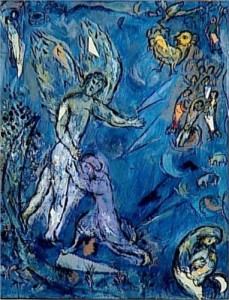 ‘Jacob Wrestling with the Angel’ by Marc Chagall

“Israel” literally means “struggle with God.” We, as the Jewish people, are referred to as Bnei Yisrael- the sons of Israel. We are the children of God’s struggle and, as such, won’t always be able to find peace within everything we do in our daily lives. Who would want to be in a constant battle with the world around them? Why would someone submit themselves to such a lifestyle full of rules that don’t make sense and “restrictions” to limit their freedom?

More often than not, the conversations I have with people at Pardes are about these struggles:
Do I really want to wake up for minyan in the morning?
Am I comfortable wearing skirts/pants/kippot/tzitzit/tefillin etc… ?
Will I eat dairy out/only cold dairy/only vegan/only at kosher restaurants with my friends/family?
If there isn’t an eruv, am I comfortable carrying on Shabbat?
What’s more important- following Halacha to a T or living in the spirit of the law?

While in Hawaii, I didn’t have to think about any of these things. It was a matter of going with the flow and, well, being on vacation from everything. By the end of the trip, I was starting to feel empty. Don’t get me wrong, I had SUCH an amazing time and would absolutely LOVE to go back. At the end of the day, however, I’ve come to realize what’s important to me. I need that constant struggle- the constant debate that keeps me on my toes.

It’s kind of like working out. You have an inner dialogue about whether or not you want to go to the gym. You finally make the reluctant decision to get off of the couch. Post workout, you feel great. The next day comes and you’re incredibly sore. Dialogue #2 enters your head about whether you should stay in bed all day or painfully get up and do something. This goes on for awhile and suddenly the gym doesn’t sound so terrible. So you decide it’s time to up the weights or increase time spent on the treadmill. Next thing you know, you’re back at square one. But the difference this time is that you’re stronger. The workouts become more meaningful and you find reason in what you’re doing.

What’s the alternative? Sitting on the couch, watching yourself get flabbier and flabbier.

So what does being Jewish mean to me? It’s all about the constant struggle- whether it be making decisions on my Shabbat/ kashrut observances, where to daven, what to wear, or finding time between Torah study to get to the gym. I don’t want to live my life as a flabby couch potato so I continue to explore the world of Halacha while eagerly awaiting every struggle that comes my way.

But let’s be honest- I’ve never been one to just sit still and let things happen.