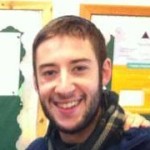 Want to learn a ditty or two from the tallest guy at Pardes? Eli Witkin is your man! He loves and knows probably every song in the Pardes bencher, and he’s a patient and wonderful teacher. It seems the only thing that may distract Eli from his intense studying is music. If music is playing in the background, Eli will mostly likely start dancing and tapping along.

Actually, there always seems to be a song in Eli’s heart.

Eli grew up attending a pluralistic Jewish Day School in Minnesota from K-8th grade. He also attended a number of Jewish Summer Camps, everything from secular to religious to Zionist.

In 7th and 8th grade, the school he attended had a rule that boys must wear Tefillin. At that time, Eli refused. Eventually, the school changed the rules because of Eli’s protest. The boys were not obligated to wear Tefillin anymore, and what did Eli do? He, of course, decided he was ready to start wrapping Tefillin!

Growing up, Eli was active in BBYO and attended their International Leadership Seminar in Israel, an elite leadership program for teens. Thank you BBYO! He is definitely still using those leadership skills here at Pardes!

One of the most popular questions to ask around here is:”Why are you at Pardes?” So, Eli, tell us…

Well, for many people, college is often four (maybe even more) difficult years. In Eli’s case, it certainly was. He struggled emotionally and interpersonally because he had trouble finding a community that fulfilled his Jewish needs and extracurricular activities like hiking and Ultimate Frisbee. At this point, Eli was experimenting with becoming more observant. It felt right to him.

But it was definitely a challenge. It was a struggle to find the balance between living a Halachically Jewish Life and other normal and social activities in college. For example, “should I or should I not go out to a bar with my friends on a Friday night?”

Eli has had many experiences which influenced his life. During his junior year at university, he studied abroad in New Zealand because spending time in a foreign country was important to him. While he was in NZ, he befriended two Shlichim from Baka who were influential in his journey to becoming more observant. Eli finally found people and a community he connected to. Not only were they observant Jews, but they also enjoyed the same activities as Eli. This is where his eyes were open to the kind of Jew he wanted to be. For the first time, Eli was able to go camping and hiking on Shabbat, while still keeping Shabbat! With this community, Eli spent Shabbats singing Z’mirot all night, giving D’var Torah, and learning how to live in a world where he could be both religious and part of the modern world.

When Eli returned from his semester abroad, he lived with four non-Jewish friends, who helped and supported his new way-of-life. They gave Eli half the kitchen, so he could keep it kosher, and they even did their best to keep the apartment shomer Shabbat. Eli would host Shabbat sometimes for 30 people. One Shabbat, Eli recalls, one of his roommates accidentally turned off the light, so Eli used the light from their fish tank to read, and as soon as the roommates returned, they turned the lights back on for him. Nice living with four Shabbat Goys!

After graduation, Eli had a choice to work, travel, or study at Pardes. After much thought, he knew that he wanted to be away from Rochester (four years was enough) and he needed a break. We all know the answer to his decision…Jerusalem it was! Time to learn Torah at Pardes!

He decided to dedicate his year to text study, exploring Judaism from a new perspective and confronting the challenging questions modern Jews face today. And this is exactly what you will find Eli doing on a daily basis.

He is almost always the first person in the Beit Midrash in the morning, hard at work studying Gemara, half a page of Daf Yomi per day. He leads the mechitza minyan, and he is also often the last person to leave the building. Overall, the Pardes Community means a lot to Eli, and we are very lucky to have him! In the future, Eli hopes to find a community like Pardes that will support him and whose souls are on fire like his!

Believe it or not, Eli still makes time to watch his favorite shows like, Downton Abbey and Avatar: The Last Airbender. And something even more impressive? Eli is a phenomenal cook, which he gives credits to his mother. If you can, make sure you make a Shabbat date with Eli… it’ll be good company, delicious food, spirited singing, and, of course, insightful Torah! 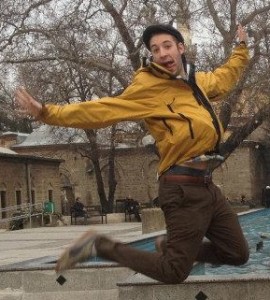