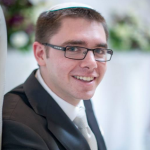 Our parsha begins with Moses’ emphatic spoken to B’nei Yisrael:
“אַתֶּם נִצָּבִים הַיּוֹם כֻּלְּכֶם, לִפְנֵי יְהוָה אֱלֹהֵיכֶם:  רָאשֵׁיכֶם שִׁבְטֵיכֶם, זִקְנֵיכֶם וְשֹׁטְרֵיכֶם, כֹּל, אִישׁ יִשְׂרָאֵל”
“You all stand here today, before HaShem, your God. Your leaders, your tribes, your elders, and your officers: all the people of Israel”

When Moses says “today,” which day exactly is he talking about? Well, in the context of our parsha, Moses is on his last day of his life. He’s coming before the people to give the beginning of his last farewell, and throwing in all the advice and rebuke he can. Before he’s gone, he wants to remind B’nei Yisrael where they are, and where they are going. Great. So…what about that Rosh Hashana thing? Well, the Zohar, the classic work of Jewish Mysticism, fills in that piece for us. Commenting on this, the Zohar says that “הַיּוֹם”/”the day/today” is talking about none other than Rosh Hashana.

So great, we’ve got a start. Looks like we’ve got our first message: when you come to Rosh Hashana, you must know where you are, and where you’re going. When Moses addresses the people, he singles out many different roles: רָאשֵׁיכֶם שִׁבְטֵיכֶם, זִקְנֵיכֶם וְשֹׁטְרֵיכֶם…חֹטֵב עֵצֶיךָ ,שֹׁאֵב מֵימֶיךָ (leaders, tribes, elders, officers, wood cutters, water drawers…). Not everyone is a leader, and not everyone is a water drawer. But that’s totally okay! We all need to realise who were are and where we stand. We can only be judged, and more importantly, we can only judge ourselves, on our own level.

So we’ve got a message from Nitzavim, but what about little ole Va’Yelech? The Kotzker Rebbe helps us out here. The Kotzker Rebbe notes that the names of the parshiot from Re’eh until the last parsha before Rosh Hashana together teach us a “battle plan” of sorts for Rosh Hashana in particular, and Teshuva (repentance) in general. Re’eh – see what you want to fix. Take note of it. Shoftim – set up judges for the problem. Know what you have to do, or not do, to make sure you improve. Ki Teiztei – Go out and do some (internal) fighting! Ki Tavo – You’re entering the promised land! You’ve got to go out and act! Find opportunities to do mitzvot, good deeds, or maybe take a new class! Anything that will help you achieve your goal. And finally our parshiot: Nitzavim – You’ve reached Rosh Hashana, you’re standing before God. It’s game time!

This is where the Kotzker Rebbe ends his commentary. But we’ve still got Va’Yelech to deal with. What advice can we glean from the title of this parsha? Va’Yelech means “and he went.”  You’ve made it to Rosh Hashana, and that’s great, but have to keep moving. You’ve got to keep going! You came to Rosh Hashana knowing who you were and where you wanted to be. Don’t give up! Don’t give in! Don’t be stagnant! Keep working on yourself and at your goals!

As we approach Rosh Hashana, take a second and ask yourself, “where am I today?” And then ask yourself, “Who do I want to be?” And remember, Teshuva is a process. All personal growth is a process. Keep working at it, and keep going, and you’ll be amazed with how far you’ll go.