Reflections on the Summer: Helping Each Other Through the Wilderness

It’s worth taking a moment to consider the radical nature of the rabbinic project. When the Second Temple was destroyed in 70 C.E., there was no guarantee that the Israelite people, their culture, or their way of life would survive. In response to this uncertainty, the rabbis offered a profound reformulation of religious thought and praxis. What is most striking about the rabbinic project is that it is multivocal. Instead of creating a dogmatic and uncompromising religion, the rabbis respond to the chaos of their time with dialogue, divergence, and compromise. The staying power of this model is evident, as we continue to study the record of those conversations nearly two millennia later.

But why choose multivocality? Perhaps the rabbis recalled another moment of intense change, looking to the history of our people for inspiration. The Torah tells us that when the Israelites were liberated from Egypt, they left in an erev rav – a mixed multitude, that not only included members of their own tribe, but Egyptians, Midianites, and other groups that had suffered the burden of slavery. The rabbis recognized that a community that speaks with many voices is strong, enduring, and capable of journeying through the wilderness. It is an erev rav that leads us out of Egypt.

Michael Walzer writes, “Wherever you live, it’s probably Egypt.” In Hebrew, the word for Egypt is Mitzrayim – sometimes translated as the place of narrow straits. We live in a time of narrowness. Through the communities we join, the news we watch, the social media we consume, we surround ourselves with like-minded people – and in doing so, create echo chambers where we only encounter voices that confirm what we already believe to be true. We are encouraged to be univocal. That which we don’t agree with is fake news.

But who is wise, the rabbis ask? One who learns from all people. I believe that studying at institutions like Pardes is a deeply counter-cultural act, resisting the narrowness of our social and political discourse to become multivocal learners. We sit across the table from people who are often very different from us, to pick apart a text that doesn’t offer simple answers; instead, we join the conversation and learn to ask brave, compassionate, and meaningful questions. 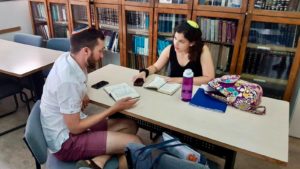 For if we take seriously the proposal that all people are created b’tzelem Elohim, in the divine image, then we must contend with the fact that everyone has something to teach us. This is easy to do with those we get along with – but how much harder, and how much more important, is it to look at the people who challenge us and ask what facet of God they reflect into the world. Yet if Judaism is to thrive, this must be our guiding principle: to be an erev rav, a cohort of multivocal learners helping each other find our way through the wilderness.