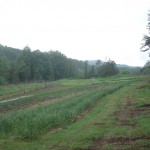 The craziest job interview I’ve ever done happened in December of 2009. On a cold, sleepy morning on a farm in Northwestern Connecticut, I stood in the snow near the henhouse holding buckets. The man running the slaughter passed us chickens in the midst of their last muscle contractions. Later that morning, we plucked and eviscerated the birds. Thankfully, I got the job, as a part of Adamah: The Jewish Environmental Fellowship.

This was my first exposure to shechita (ritual slaughter), but I had been thinking about food production for a while. Inspired by my sister, I became a vegetarian in college. It also help me keep food costs down as a student. Then, I started to learn about the way my food was produced. I learned about the way animals are used and abused for their meat in the industry (read The Omnivore’s Dilemma), the implications on the politics of kashrut (check out Kosher Nation, by a Pardes alumna), and the food system’s effects even on the lives of people around me (see Bell Hooks‘ book Belonging for more on this). I became an advocate for food that would be healthy for both myself and my community. I wanted to be a part of producing healthy food – whether as a farmer, as a shochet, or as an organizer in my community.

During my time working in Washington, DC, a local rabbi, Shmuel Herzfeld, and I studied the laws of shechita once a week. The laws of shechita are first outlined in Hullin, a tractate of the Talmud. They are consolidated in the Shulchan Aruch, and then again in a single book called the Simla Hadasha, published in the 1730’s. Nowadays, every shochet studies the Simla Hadasha and is expected to know all of its laws by heart before becoming certified. Rabbi Herzfeld and I worked our way through the Simla Hadasha over the course of the year, and as my learning continued, the dream of certifying as a shochet became more and more vivid.

I arrived in Jerusalem in August, excited to study at Pardes for the year. I also longed to continue my study of shechita and gain practical experience. I got connected with a rabbi living in a neighborhood near Mea Shearim. The first time I visited him, in his uniformed white shirt, black pants, and black kippah, he saw my brilliantly purple shirt and commented on my shoulder-length hair. “It would really be better for you if you cut it – to win community respect. You’re reflecting on me too, you know, as my student.” I had been growing it out for two years – how much was I willing to sacrifice to learn shechita? I asked my roommates to help me chop it off.

I started learning with the rabbi and a hevruta every night for two hours. He told me where I could buy a shechita knife, and we practiced sharpening it to a perfectly smooth, perfectly sharp edge. Some nights the rabbi would unexpectedly cancel, for a bar mitzvah or a bris. Sometimes his teaching was gruff, and he said nothing except “wrong – fix it.” It felt like a scene from the Karate Kid, the wizened and demanding master watching over the fumbling students.

We shechted for the first time at an agricultural moshav an hour west of Jerusalem. We rented a car for the day, put on dirty overcoats, and brought our knives. I slaughtered five birds in a kosher slaughter and got to take them home to cook myself. I was aware, during the slaughter, of the gravity of our act – taking the life of an animal in a traditional, divinely inspired process, in order to feed myself and my community. I keenly felt divine eyes throughout the process looking on and assessing: are your intentions pure? Are your movements competent?

Two months ago, I received my official, signed certification from my rabbi of my status as a shochet of fowl. I feel deeply connected again to my mission of making the world and my Judaism sustainable, and my dream of one day farming and producing my own food. I can share a new skill and feed people.

Later in the year, I am planning to offer a session on shechita for Pardes – you are all invited to come and learn more about this ancient and important art and law of preparing the meat we eat. Stay tuned for date and time.