Over the course of many consecutive summers as a camper at JCA Shalom in Malibu, Louis learned about Judaism “without realizing” it. He first attended camp as a fifth grader, and returned year after year until the summer after his first year of college (as a camp counselor).

“I did USY for six years, and went to Hebrew school through 10th grade, but the biggest influence upon my Jewish identity was definitely JCA Shalom.

Camp was the first time I felt connected to a Jewish community – first time I went to a Shabbat service… it really changed the way I felt about Judaism in general – it made me want to go to Hebrew school!“

When Louis began college at UC Berkeley, his older brother suggested that he join Alpha Epsilon Pi – the international Jewish fraternity. “After all,” he said, “if you’re going to hang out with other Jewish students anyway, you might as well join ‘AEPi’.” 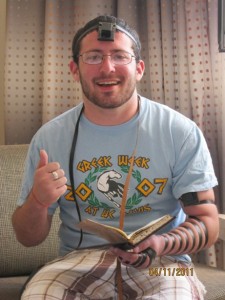 Louis became president of his fraternity, and his chapter ran several fundraisers for Shaare Zedek Medical Center, successfully raising more than $7,000 for the Jerusalem hospital. Additionally, the young man was inspired to organize an Israel advocacy event at UC Davis after visiting Israel with Birthright during Operation Cast Lead, and brought his AEPi chapter together with other Jewish student groups to present “the good that Israel brings to the world.” Israeli professors spoke out at the AEPi house that day, and the Israeli Consulate General arrived from San Francisco to discuss Israeli current events on campus.

Beyond his fraternity, Louis contributed to the Jewish community in multiple ways during his time at UC Davis. He worked at Hillel, interfacing with donors and doing graphic design for their capital campaigns; and he worked at a reform temple throughout college, advising the NFTY youth group, teaching Hebrew school, and developing a unique shabbaton program led by high school students that he personally trained during the school year.

Towards the end of college, Louis began to consider the possibility of becoming a non-pulpit rabbi, and his family’s rabbi suggested that Pardes would be great for him. Louis applied to the Year Program, and it just so happened that on the day that he received his acceptance letter, he also happened to receive an e-mail from his friend Sam Blumberg (’10, Educators ’10-’12) telling Louis come to study at Pardes with him.

Next year, Louis returns home to California to begin his rabbinical studies at AJU, and he’s been in correspondence with the U.S. Navy about training to become a military chaplain. “It would be a great way to support Jewish men & women in the armed forces, and work with people of other faiths,” he says, “I really enjoyed being a religious studies major and – becoming a chaplain would give me the opportunity to learn about other religions and foster interreligious dialogue.”