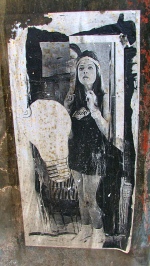 parshat ki tetse brims with examples where the men make decisions that crucially impact the women, while their opinions are completely absent from the equation.  in fact, their voices have been so successfully silenced, that often unless you were looking for them, you might not even notice they were missing in the first place.

in parshat ki tetse, we meet the attractive woman who catches the eye of her captor, is taken from her family, and find herself mourning for her parents in the home of this new male stranger.  we have the sad case of the woman who due to an ערות דבר, a shamefully exposed thing (translation: robert alter) finds herself unwanted by her new husband.  she is then sent forth from this first man to become the wife of a second man who also comes to hate her.  and then, the Torah specifies that the first man cannot take this woman back as his wife because that would a תועבה, an abhorrence before the Lord.  great, but what about this woman who is being cast about from one husband to another and back again?

i’m in the background.
but look closely and you’ll see,
my lips are moving.

here’s where we come in,