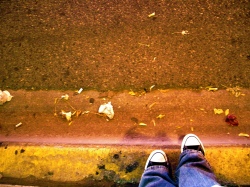 this week’s parshat re’eh teaches a bit of the old mixed with some of the new.  the old:  don’t worship other gods.  this is something pretty fundamental to our covenant with God that we’ve covered several times over in other places of the Torah.  however, the bit of the new: don’t worship אלוהים אחרים אשר לא ידעתם, other gods that you did not know (devarim 28:11).  so, the question is:  what is gained by this added phrase “אשר לא ידעתם”?  isn’t enough to have just written “don’t worship any other gods” at all?

this is the part of signing on to the covenant with God that strikes me as quite akin to getting married.  when we get married, we do something sort of crazy.  we not only commit ourselves to this person for the time being, given everything we know and all of the options formerly and currently availed to us, but we say, regardless of whomever and whatever comes my way, i’m going to choose you.

and this is exactly what God is asking of us.  God’s saying, “okay, maybe now you’re willing to accept me as your God.  and now, you’re not so quick to run after those other gods.  but that’s not what i’m worried about.  i’m not worried about the gods you’ve already encountered in the past or the gods that you see other people worshipping now.  i’m worry about thirty years down the line, when times are hard, and some other god turns your way, and well… i’m afraid you’ll return the glance.”

can’t begin to know
what thing(s) may lead me from you
but to you, i swear