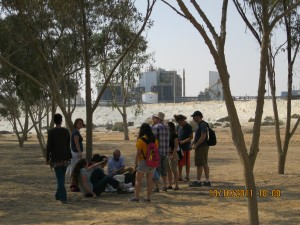 (X-posted from my home blog Yinzer in Yerushalayim)

There is nothing like Yom Kippur in Israel. During a community guest lecture about 2 weeks ago, Jeremy Benstein, director of the Heschel Center gave us a chart showing Israeli energy usage hour-by-hour during Yom Kippur, it virtually flat-lines For 25 hours, the entire country shuts down. There is nothing like this on any other day in any country anywhere in the world. To see it statistically though was not so shocking as experiencing it myself. I left the absolutely swamped Kol Nidre services at Yedidya to find Jerusalem a ghost town–the ordinarily bustling, crazy streets of the Holy City were absolutely silent, it felt so surreal, like being in a zombie movie. In their place were people in white and kids on bikes, scooters, rollerblades, and skateboards practicing how they will drive cars on these streets when they grow-up. I eventually made my way to Emek Refaim, the street I live on and also the major commercial center in my part of town. As always, it was busy, but instead of the usual cars, buses and taxis, it was jammed with people talking, laughing, and dodging miniature Israelis on bikes. It felt like a block party, and the friends from Pardes I kept bumping into and I were eager to experience it. Some of my friends mentioned it felt almost wrong for there to be such a festive atmosphere on Yom Kippur, but I disagree. As Rabbi Eli Fink points out, Yom Kippur is the most unifying Jewish holiday because nearly everyone celebrates it the same way. In a similar way, everyone goes to Emek after Kol Nidre: religious, secular, and all those in-between. If God likes seeing Jews unified and enjoying this time He has given us to be together, then the mere fact that we can freely congregate and celebrate the holiest day of the year together as Jews in the streets of Jerusalem is surely something to celebrate. The next day, on the way home from shul in the 2 and-a-half hours or so that we had between the morning and afternoon services, my friend Kyle and I laid down in the middle of what is normally the busiest street in Jerusalem, the 4 lanes of chaos called Derekh Chvron, for around 30 seconds and got up only because the pavement was so hot. Had we tried this any other time of any other day of the year, we would have been killed by traffic in under 10 seconds.

The Yom Kippur services were nice, too. Once again, Yedidya had wonderful new melodies and lots of spirit to keep me going through the marathon day.

Speaking of the end of Yom Kippur, on Sunday night, Pardes had a night of learning open to the public for Sukkot that had some great classes and equally great free ice cream and fruit, but since I don’t want to write a novel here, I think I’ll just skip ahead to write about our 12 hour long Social Justice Track tiyyul to the Negev yesterday.

The theme of the trip was environmental justice and minority rights in the South. It started with a tour of the Makhteshim-Agan chemical plant in Ramat Hovav. Makhteshim-Agan is one of the world’s leading producers of generic pesticides and was recently bought by China, raising questions for it’s future in Israel (see http://www.haaretz.com/print-edition/business/bottom-shekel-dankner-s-dilemma-1.320136 for more information). The plant manager gave us the tour and told us all the cutting-edge environmental policies the plant has recently put in place. Next we went to the Ramat Hovav industrial council. No one lives in Ramat Hovav, it is strictly an industrial site, built to provide jobs to people in the Negev, particularly Be’er Sheva 10 km away. The woman at the council gave us a presentation about the cutting-edge, albeit too recent, environmental policies at the complex and uncomfortably answered our questions about the effects of past storage of pollution and the neighboring Bedouin communities. We then visited a neighboring unrecognized Bedouin community, followed by a visit to a recognized one. The differences between recognized and unrecognized Bedouin communities is too complex to get into here, but suffice it to say, it’s much better to live in a recognized community. Our tour guides said we were the first religious Jewish group to go on this tour, a distinction that served equally as a source of pride and embarrassment for us all. After seeing the Bedouin villages, we went to the Jewish town of Yerucham and ate pizza on the roof of Leah Shakdiel, an interesting and inspiring woman, who gave us her opinion on…nearly everything related to Israel.

A day later, I’m still trying to digest everything I saw yesterday but this much I do know–the true situation is complicated, much more so than the guides at Ramat Hovav and the leaders of the Bedouin tour would have us believe. I’ve long suspected that the true story of the Bedouins in Israel is far more complicated than the Disney World-like Bedouin village you go to on Birthright (I’m the one in that picture who doesn’t look cool), but to see the situation with your own eyes is very powerful. Nevertheless, I’m still not sure what I think other than that I pray for the day when the concept of a Jewish state is synonymous with being a blessing for all peoples, as it should be. Here are some pictures I took on the trip. Sorry, but I didn’t take any at Wadi Naam, the unrecognized village.

I’ve decided to include a Quote of the Week starting much too late this week. Seemingly every week since I’ve been here, someone has said something so memorable I wanted to put it on the blog, but couldn’t think of a natural way of doing so. Each time I considered doing a Quote of the Week, but then worried that I might not be able to continue it if the awesome quotes slowed down. But after 6 weeks now I can be pretty confident that they won’t, and if there is ever a week without one (which given the brilliance of my teachers and classmates now seems an impossibility) I will use one from another week.

Quote (really Paraphrase) of the Week: “Who gets inspired by black and gold? I would make Bibles in bright colored bindings with a mildly inappropriate picture on the cover to show people that this i something that is revolutionary, that this is a book that changed the way the whole world views itself!” – Rabbi David Levin-Kruss

(Of course, I get plenty inspired by black and gold, but his point is well taken.)

Next new post after Sukkot. Now I have to start getting ready for tonight.