Ever since I’ve arrived here there’s been stuff I wanted to talk about but just didn’t have room for in that week’s blog post. Since this was a relatively slow week, I thought this would be a good opportunity to share some of them, but I’ll start with the biggest story from this week:

*So Wednesday at around 11:50 my chevruta and I are studying Mishna (Brachot Ch.1 Mishna 2 to be precise) when I hear someone say, “Rain!” I didn’t think much of it until I heard the scuttle of chairs across the linoleum. That’s when I looked up to see that, my God it really was raining! My chevruta and I got up to join the crowd gathered around the window to watch the rain, amazed. It was beautiful–the first serious rain of the season (called the Yoreh), and since it was also the first real weather I’ve seen since I’ve been here, it was also quite surreal. Six days ago we said the traditional prayer for rain on Shmini Atzeret, and it was thrilling to see that, at least for now, our prayers were answered. It was only after we were already standing in wonder that I realized how funny it is that a Pittsburgher should actually be excited about that rain. Now if only we could be so radically amazed about all weather.

Maybe 10 minutes later it stopped and hasn’t been back since. 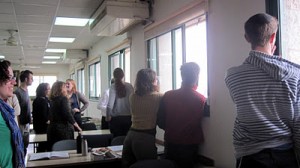 *We hear a lot in school, especially from guest speakers for my Social Justice class, about how, even though Israel is still widely associated with Kibbutzim and the Kibbutz mentality, while most Israelis were able to at least get by during the years of the welfare state, now, because of the capitalist reforms of the 80’s and 90’s Israel is now almost as bad as the US in terms of income disparity among industrialized nations, and times are tough for much of the country. Much of the Tzedek Chevrati, or Social Justice protesting here has been focused on just this issue. Yet in spite of this, at least compared to America, Israel is still a strongly communal culture and it shows in nearly every facet of society.

After dinner on the first night of Sukkot I took a nice walk around the neighborhood. Sukkas were on every mirpeset and driveway, in every alleyway, and on most rooftops. Most of them were filled with Jews of all kinds talking, eating, singing, spending time together, and just being joyful. It was so inspiring. It was also inspiring how people could leave chairs, tables, crockery and other things in their sukkahs without any fear of them being stolen. Regardless of how secular most Israelis may be, I strongly believe shared Judaism and Jewish values play a strong role in the communal nature of Israel. This spirit explains why seats on busses here are arraigned in blocks of 4 to allow group conversation (this could never work in America and I shudder to think what would happen if we tried it). It explains why a stranger would pick up your lost key and put it on a ledge knowing its owner would find it there and why a woman at a bus stop would caution a stranger about a check sticking a little too far out of his pocket. Yes, people argue, yell, and critique the actions of strangers more here (for example, someone once said a woman behind him at the ATM once yelled that he would need to take out more money, and someone else told me how once when he picked up a container of skim milk, a woman said, “That’s water!” put it back, and gave him a fatty milk instead. Every non-native here has stories like this.) but I think even that is because people here aren’t really strangers the way we know them, they’re all Israelis, they’re all in this together. It also explains why this country, for better or for worse, would be willing to release over 1,000 people, many of them bent on its destruction, just to get its son back.

*The Tuesday Critical Issues Group Lecture from 12-1 is always one of the highlights of the week. This past week the lecture was a debate between two of our rabbis about the meaning of Israel as a holy place, one felt holiness was intrinsic to the Land of Israel, the other felt it is imposed on the Land by Jewish culture, and that the lived consequences of believing that a place is intrinsically holy for you has and will continue to cause much more harm than good. The debate was riveting as much for its content as for the passion both brought to their positions. But the most inspirational part was how, even in the midst of passionate debate about real, serious issues, both participants maintained a mutual respect for each other and never resorted to stereotyping or name-calling.

I really don’t think any other yeshiva in the world provides its students with such a wide-range of views, then leaves it up to them to decide whose side, if any, they take. This is what I love so much about Pardes, it respects your intelligence—no one ever tells you how to think or what to feel. They believe the Jewish tradition can speak for itself on its own terms, so they provide the education and allow you to ask questions and draw your own conclusions. When the Palestinian Authority first went to the UN about a month ago, we had presenters from 3 groups present information and analysis of the ramifications this could have for Israel from 3 different perspectives then had them field questions. Not all Group Lectures are so controversial though: During the High Holiday season, we had a choices of classes about t’shuvah and one week, we had a class on whether a non-denominational, non-coercive yeshiva is an oxymoron and if its even possible to build a community this way (the answers our teacher ended up with [though of course we were allowed to disagree {not that anyone did, though you can and that’s perfectly alright}] were “no” and “yes,” respectively).

* Related to this, I have a great idea for Pardes’ next slogan: “The Pardes Institute: Judaism as it can be.”

* I don’t have the facts to back this up, but I believe that every Jew in the Diaspora has an Israeli doppelganger. I feel this way because the Jewish population is now split roughly evenly between Israel and the Diaspora, and it seems like almost every time I’m out—though this happened twice as often when I lived in the Old City—I do a double-take after thinking I see a Jew I know from home on the sidewalk, but it usually turns out to be someone else. (not always, though—by week 2 already I mentioned that I had bumped into nearly everyone I know who has made aliya, but I have since bumped randomly bumped into even more friends from home who are here either permanently or as students.) I realize the obvious gaping hole in my theory however: In order for this to be true, there would need to be a mass repository of swarthy bald Jewish men with gold earrings living in some remote corner of the exile. To the best of my knowledge, no such place exists. Yet.

To answer your question, there is an Israeli Derek and he’s currently in Washington, D.C. studying differential calculus.

Quote of the Week: (while studying Heschel’s The Sabbath in chevruta):

She: Wow! So the Sabbath is really like the model of the perfect relationship-