Having grown up in Newton, Massachusetts, Sean had a lot of exposure to Judaism. His family’s liberal church would often invite Jewish members of their extended community to speak from the pulpit, and Sean attended many Passover seders at a family friend’s house as a boy. And of course, he only dated Jewish women 🙂 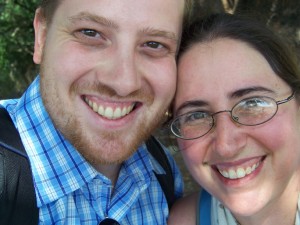 Sean began dating Kelilah Miller when he was 19 years old, and eventually joined her for services at the Jewish Community of Amherst, as she was actively exploring and engaging with her Jewish identity. Sean was very supportive of Kelilah’s Jewish journey, and he gradually found a home for himself in Judaism, and converted when he was 24 years old.

Kelilah and Sean were married in August 2010, just before she began her rabbinical training at the Reconstructionist Rabbinical College. That Fall, the young couple hoped to come to Israel for a year, but they remained in the USA for the wedding of Kelilah’s brother, and ultimately arrived in January 2011.

As Kelilah continued her rabbinical studies in Jerusalem, Sean considered his options. He soon learned of Pardes at a Reconstructionist Shabbaton from Pardes student Kimmy Fair, and excitedly enrolled the very next day.

Through Zvi Hirshfield’s Critical Issues in Jewish Thought, Sean developed insight into the philosophies of many great Jewish thinkers, and as class members shared their perspectives on Torah, Hashem, Halakha, feminism, and other sensitive religious subjects, he discovered that he wasn’t such an odd fit for Pardes. The warmth of the community quickly drew him in, and he found that he had much in common with the other students in his classes.

As an alumnus of Teach for America in Northern Philadelphia, Sean has an education professional’s appreciation for Pardes’ inclusive approach to learning.

“The positive environment at Pardes encourages me to ask questions without putting up a bravado – I never feel judged by my classmates or teachers. Dialogue is in abundance here, and around the rest of Jerusalem and Israel if you are seeking it, and if you want to engage in it. Israel isn’t a neutral ground of any sort – it’s almost a contentious ground – it’s a paradox – I love it.”