Menorah at the Jerusalem Great Synagogue

This was actually my second Chanuka in Israel, I was here on Birthright in December 2008. So the menorahs on the streetlights, the Chabad menorahs in every public square, the impossibly delicious-looking sufganiyot* everywhere, and the total lack of anything Christmas-related was not new or shocking to me. Chanuka is not Christmas in Israel—while there are decorations and menorahs out, and while the buses say (in Hebrew) “Happy Chanuka!” on them, its just not a huge deal here, like the High Holidays are.

But the lack of holiday spirit (measured in terms of shopping fatalities) left many of us Americans homesick. While the Pardes Chanuka party, with its latkes (a rarity in Israel), sufganiyot*, amazing classes , and Adam Sandler’s “The Chanuka Song” (short digression: I never realized just what a reflection of North American Jewish culture that song is until I heard it played at Pardes—the European students didn’t  understand what was funny about broadcasting a list of Jews and the whole concept makes no sense in a country where everyone’s Jewish)  the second night made it feel like Chanuka, but something of that special, secular, commercial spirit of the time we’ve all grown to love was still missing. Israelis just aren’t a jolly people.
Thankfully, Cafe Neshikot (Kisses), the unofficial annual Pardes Christmas cabaret at the Off The Wall Comedy Empire in the Center of Town came to answer our prayers Sunday night. (Reason #102 to come to Pardes: It is the only yeshiva in the world to have a Christmas cabaret, unofficial or otherwise.[Probably. I admit I’ve never been to the Mir.]) Students on stage strutted their talents performing talents in-between hilariously written and performed emcee segments while students in the audience drank house drinks and homemade eggnog and cheered them on. It was so much fun I never wanted it to end.
But I’m glad it did, because afterward, some friends and I went to my new favorite restaurant, Mike’s Place, Heaven on Earth for the homesick American. How so? Picture the atmosphere of Primanti Bros.: Walls lined with TVs tuned to American sports, with every square-inch of remaining wall space dedicated to sports and beer memorabilia. Now make the menu kosher, half the guys in the place wearing kippot, and as soon as you walk in, a Chabad rabbi is lighting a menorah at the bar while all 100 people in the restaurant belt out “Maoz Tzur.”  I couldn’t picture it either, which is why the whole time there, I felt like I was hallucinating, it was too surreal, it just didn’t make sense—the menu is in English, everyone speaks English, the waitress is wearing a Santa hat, NBA basketball is on every TV, I’m drinking a Sam Adams draft, my seat is directly facing a 6-Time Super Bowl Champions Terrible Towel (which, in my daze of ecstasy, I kissed. Twice.) so this must be America, yet I’m eating beef nachos in a restaurant, lots of guys are wearing kippot, and my friends and I are making jokes only yeshiva students would get, so this must actually somehow be Israel. It was the best Christmas ever.
The next day, on our Social Justice tiyyul to Shilo, there was no doubting we were still in Israel. Shilo, like Hevron, is a site of almost inestimable Jewish importance in the West Bank, except here, in the village, it is peaceful. According to the Bible, Shilo is where the Mishkan, or portable Tabernacle built in the Wilderness of Sinai, rested from the time the Israelites conquered the Land under Joshua for 369 years until the First Temple in Jerusalem was built by King Solomon. Neither Temple lasted as long as 369 years, yet people forget about Shilo and it is not a holy site the way Jerusalem is. Our guide, Shilo resident and former director of Pardes, Rabbi Dov Berkowitz, described Shilo as being geographically similar to West Virginia or Kentucky, and he was right. Holy or not, Shilo is gorgeous: Quiet, peaceful, serene, free of the chaos, craziness, and all-around ugliness of the Hevron war zone, in an alternate political universe, I could even see myself living there. Rabbi Berkowitz showed us the Mishkan museum where a scaled miniature replica of the portable Tabernacle is built, then showed us the archeological site of Tel Shilo that suggests this is indeed the real Shilo.

The highlight of the trip was seeing the site on which most believe the Mishkan rested for those 369 years—a natural, flat, rectangular plain, maybe about a football field long by twenty or thirty yards wide right on the middle of the steep hillside seemingly tailor-made to the specifications of the Mishkan. But unlike the place where the Temples used to be, this was just a field practically in the middle of nowhere. There was no Wall, no marker, no shrine, no shul, not even a fence—to go on the Temple Mount, I would first need to dunk in a mikva  and then spend some time really preparing myself mentally, but this—the first site of the official altar to YHWH—was just a field. I could have taken a nap, had a picnic, or played Ultimate Frisbee on it if I wanted to. It was actually quite refreshing; the world can’t handle another Jerusalem. After briefly going up to the lookout point at the top of the Tel, Rabbi Berkowitz warmly invited us into his house for hot tea and coffee, fresh dates, conversation, and questions. It was as lively and unsettling as you would expect.
From Shilo, we went to another settlement near Beit El to meet my new hero, Nahum Pachenik, founder and director of Eretz Shalom (Land of Peace). Nahum, a Breslov Hasid and son of a Holocaust survivor, as one of the first Jewish children born in the West Bank after the Six-Day War, has lived over the “Green Line” his entire life. He said that he was thuggish and bigoted as a youth, supported harassment of Arabs and frequently wore a T-shirt that said “No Arabs No War.”  His life was changed when he met Rabbi Menachem Froman who told him the shirt would be equally true if it read “No Jews No War.” After learning with R. Froman more, he came to realize there are two peoples with legitimate claims to this Land, and neither one is going anywhere, so the only thing to do is learn how to live together in peace. From this epiphany, Eretz Shalom was born. Eretz Shalom is an organization run entirely by Jewish settlers trying to build peace between Jews and Palestinians from the ground-up through organizing events like play-dates between Jewish and Palestinian kids, planting olive trees together, going to pray in a mosque together, and other seemingly little, everyday things that can go a long, long way towards shifting relationships towards the other side, from seeing them as a homogeneous, evil “other” to seeing them as your neighbors and maybe even as fellow humans.

Of all the settlers we’ve met, I think Nahum is the only one who really means it when he says he doesn’t have any plans for what a final peace will or should entail. How can you even begin speaking of peace when both sides so hate each other? He believes we have to learn to live together, to respect each other first, then peace, realpeace, will develop organically from there, probably taking a form we can’t even imagine now. Eventually. Nahum says that since he used to be an extremist and now he’s not, he sees no reason why others wouldn’t lose their extremist views too once they actually come to know the other. It is simultaneously the most idealistic and the most reasonable solution I have yet heard. He is scorned by both the far-right and the far-left, so he must be doing something right.
The rest of the week was considerably less exciting more productive but still fun: I spent most of it working on my grad school application and Torah trope by day then hanging-out with friends by night. All-in-all, an illuminating (rim shot) second Chanukah in Israel.
Quote of the Week: “I want to be a rabbi because I want to get paid to be a Jew.”
Hebrew Word of the Week: סופגניות (“sufganiyot”) – stuffed donuts 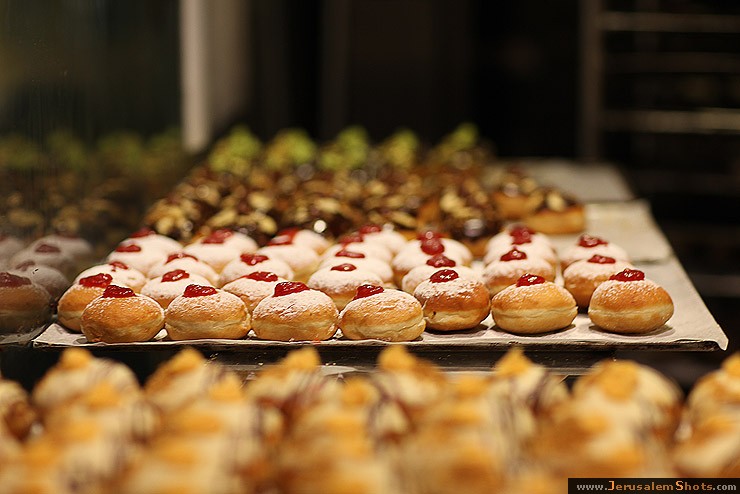