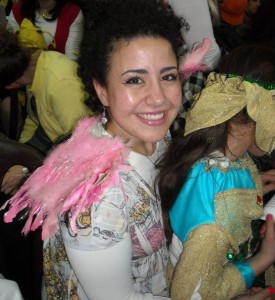 Growing up in the Sephardi community in Toronto, Esther’s Judaism derived mainly from her mother and the weekly Shabbat dinners at her grandmother’s house.  Her father, who comes from an essentially secular background, did not push for such a traditional upbringing, and Esther fondly remembers being snuck into McDonalds by her father, where he would question her beliefs in God while buying her McNuggets, all while Esther was no older than eight.

The oldest of three siblings, Esther went to a community day school until fifth grade, but hated it and transferred to public school for the remainder of elementary and high school.

Ultimately, Esther became interested in finding her own path in Judaism through her cousins, who had very positive experiences on trips to Israel after high school, which led to Esther also finding a Young Judea Year Course after high school.  In retrospect, she isn’t exactly sure what made her take a year to go to Israel at that point in her life, as she was not involved Jewishly.  She was working out five days a week and had just become a personal trainer, and, on the whole, not feeling a need to connect religiously.

However, she did go, and Year Course changed her life.   She began by living in Petach Tikva, teaching at a social welfare kindergarten in the morning, and tutoring an 11-year-old schizophrenic boy English at nights.  Then she moved to a secular kibbutz in the north, Bar Am, which wasn’t part of the program, but they let her go anyway.

Next she went to Jerusalem and lived in the Youth Hostel (where Pardes stays for Shabbatonim) and took classes there through American Jewish University.  (At the time she had been accepted to York University, in Toronto, in the kinesiology program)  That was the first time she realized that she could learn about Judaism from an intellectual, philosophical, space.  She also talked to a guy on year course who had frummed out during the year, which was really fascinating.

After Year Course ended, Esther stayed to learn at Ne’ve,which she describes as:

“The biggest and most well-known kiruv seminary in the Orthodox world, with world-renowned rabbis and lecturers and various programs. I was in the Mechina program, for women who were not observant and were exploring Orthodox Judaism for the first time.”

When Esther began at Ne’ve, she had the goal of only taking on Jewish ritual practices that she had fully understood — but three weeks later she was totally frum.

A number of factors contributed to this change.  There were many beliefs that Esther didn’t know how to articulate, even though she had assumed them for many years, and at Ne’ve she saw teachers putting into words many things that she felt to be true — while intellectual, it was also a very experiential educational atmosphere.  Also, she saw the teachers themselves as such refined, incredible and inspiring people, who seemed so happy and at peace with themselves, that she knew whatever they were doing in their lives had such a positive impact on their personal development.

So Esther returned home to begin her BA, which she switched to the Jewish Education program (still at York), consisting in an honours B.A. in Jewish Studies and a B.A. in Education.  During that degree, she did not stay away from Israel for more than 6 months at a time, including a year abroad at Hebrew U, and a bunch of different seminaries.

Esther spent last year at seminary as well, after making aliyah, at which point she briefly checked out the Pardes Educators Program.  While she loved the energy, and felt that the excitement for Torah learning was fabulous and the teaching was on a high level, a twist of fate found her back at seminary for one more year.

This year, though, she took the plunge and joined PEP.  Esther says that her favourite thing about Pardes is learning with her unlikely chevruta, fellow PEP student Daniel Weinreb.  Esther had resolved, going into the year, not to learn with any males, but now finds herself loving the learning that she and Daniel do in a number of different classes.  Her least favourite thing about Pardes is that she does not get to partake in the bounty that is the Pardes hefker table due to kashrut concerns — Esther must clearly be loving Pardes if that tops her list!