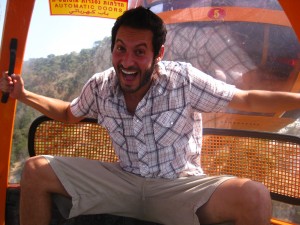 Joseph is a Persian Cowboy.  He was born in Dallas, Texas to immigrant parents from Iran.  He and his older brother David attended the Akiba Academy of Dallas, an Orthodox day school, through Joseph’s middle school years.  When he was eleven, Joseph’s parents decided to move to LA to be closer to family, where he finished his middle school education at a similarly religious school, Hillel Hebrew Academy.  Throughout his childhood, Judaism was central, but meticulous religious observance was not.  However, even though family life and Jewish identity was important, the focus on observance of minute details of halacha over the value of community turned Joseph off of Judaism during his teenage years.  He still remembers a conversation he had with his rabbi at the age of seven:

“I asked him whether it was better to drive to shul or stay home on Yom Kippur — and his answer that it would be better to stay home was deeply troubling to me.”

However, an otherwise tumultuous event near the end of grade school cemented the importance that Joseph’s parents placed in giving him a Jewish education.  About two months before graduating from 8th grade, Joseph was expelled for starting a small fire at school (no damage done), and then witnessed his parents campaign for his return to the school every day for a month until he was allowed back.  That perseverance to secure a Jewish education stayed with him.

Before that lesson came to play an important role in his life again, Joseph made it clear that he did not want to attend a Jewish high school and sabotaged the entrance exam to the local Yeshiva., instead attended public school, where basketball provided an ideal outlet.  After high school, Joseph went to UCLA where he found a way into working many a young man’s dream job — working on highlights for Fox Sports.  After six years, including a semester off and studying abroad in Siena, Italy, Joseph graduated with a BA in sociology.  During college, while still working for Fox, Joseph’s parents made a conscious push to have Friday night meals at their house once again since Joseph’s brother had moved back to LA.  Joseph found this to be a great way of bringing his family together but also struggled with going out on Friday nights.

The event that really brought Joseph back to Judaism was a serious relationship with a non-Jewish girl which ended primarily because she was not Jewish, and had no desire to raise her kids Jewish.  When she asked him “why you don’t love me more than your religion?” he didn’t have a good answer for her except for recounting the story of his parents insistence on providing him with a Jewish education and their persistence to get him reinstated after the fire incident.  In an effort to get to the bottom of that dilemma, Joseph started exploring what it really meant to him to be Jewish.  He attended a lecture by an Orthodox rabbi in town, Rabbi Seidenfeld, at the recommendation of a friend, which had a very positive impact on him.  Rabbi Seidenfeld, unlike those Joseph had been exposed to in the past, was not focused on the obligations as much as the beauty Judaism had to offer.  This religious awakening led to seeing daily practices such as davenning as being very important.  Joseph likes to see himself as seeking an answer to the question of ‘what is my purpose?’ and Judaism was, for the first time, able to provide answers.

Rabbi Seidenfeld introduced Joseph to Limmud LA, which Joseph became deeply involved in and inspired by.  It was his first experience as an adult where he felt extremely proud to be Jewish and finally found a community that he wanted to be a part of.   It was through Limmud that Joseph first heard about Pardes, when DLK came to speak in LA in 2009.

Joseph’s favourite part of Pardes so far is the people — students and teachers.

“Pardes is the Limmud of yeshivot, which makes me feel at home.”

His least favourite part of Pardes is that he has not stepped out of the bubble much yet, because there is not a lot of time.

Joseph is currently planning on making a documentary with friends he met while staffing a Birthright trip (to come to Israel).  To be called Finding Israel, it is meant to go beyond the headlines, describing their stories and what daily life is like in Israel.