Gone Now are Those Little Towns

“Gone now are those little towns where the shoemaker was a poet, the watchmaker a philosopher, the barber a troubadour…”

Imagine a small, crowded town, bustling with hurried movement and loud conversation. A place where people are fervent in their beliefs, speak in Yiddish and Hebrew, and make religion the way of the land. While most people are poor, their lives are rich with family, laughter, and tradition.

This was the eastern European shtetl.

The shtetl was an incubator for Jewish life; producing some of the most lasting traditions in Judaism. While life in the shtetls was challenging and difficult, Jewish culture flourished here.

The first stop of our trip was Tykocin, a small town in the Bialystok region of Poland. Prior to the war, Tykocin used to be a thriving Jewish community, with over 70% of its residents being Jewish.

Tykocin, or “Ticktin” as the Jews called it, was a classic example of an eastern European shtetl. 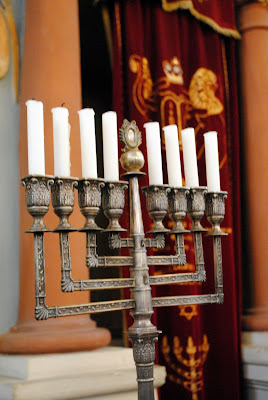 If Trees Could Speak… 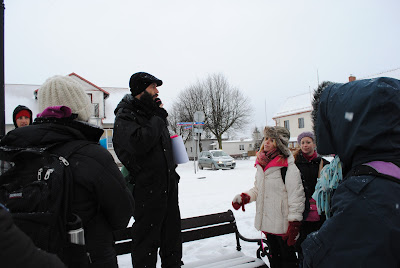 After touring around Tykocin, hearing about the pre-war vibrancy of the Jewish community, we arrived at a large, open courtyard covered with snow. There were people strolling around the perimeter, pulling children on sleds. It looked quite peaceful.
In the above picture, Rabbi Levi Cooper, our teacher and guide, tells us about the history of the courtyard, and ultimately, the fate of the Jews of Tykochin.
One evening in August 1942, the Jews of Tykochin were ordered to report to this courtyard early the next morning, to be deported to the Bialystok Ghetto. The Jews spoke with one another, and debated whether or not they should report to the square. Looking back at history, we have the luxury of hindsight, knowing the outcome of events. But at the time, they had no idea what would be the best option for them. Maybe life in the ghetto wouldn’t be so bad?
In the end, most of them reported to the square.
They were ordered to bring up to 25kg of property. In the warm weather of August, they wore warm coats and brought food to sustain them for a long time; they had no idea that they wouldn’t need these things.
At the square, they were ordered to “register” and divide themselves into groups. Men on one side of the courtyard; women and children on the other. There was a small orchestra playing in the courtyard.
But this was all a facade. The Jews weren’t being deported to the Bialystok Ghetto, nor did it matter if they registered, or packed their most precious belongings. The quaint orchestra was performing as a sick way to keep the people calm and oblivious until the very last moment.
The Jews were rounded up, put into wagons, and taken to the nearby Lupochowo Forest.
At this point, we got onto our tour bus and silently made our way to the forest. Even though Levi didn’t finish the story at this point, we knew how it ended.
At the Lupochowo forest, the Jews were lined up and taken to one of 3 pits, where they were massacred with machine guns. The account that we read said that the ground was pulsating with the seizures of the dying people for days.
Mass graves are not only tragic because of the number of lives that were ended there, but also by the loss of individual identities. We saw yartzheit candles there, and notes remembering individual names. This was very important, because it was no longer a mass grave, but a group of distinct individuals whose entire worlds were lost. 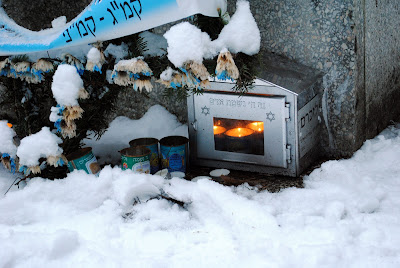 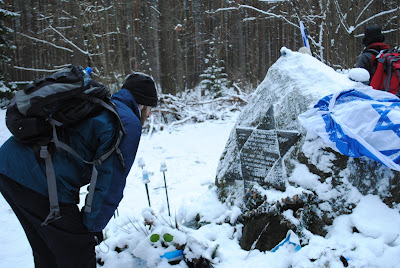 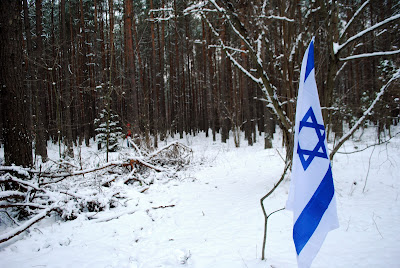 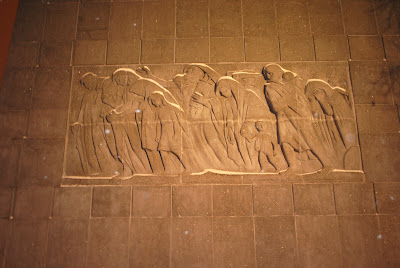 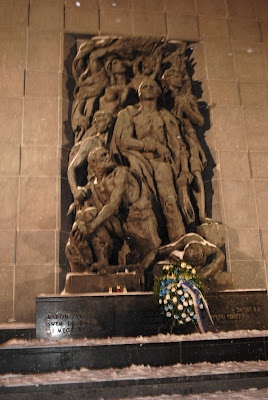 As we walked around the area that was once the Warsaw Ghetto, brushing the snow off of memorials, we heard heroic stories of resistance. Here are two that particularly resonated with me:
The Warsaw Ghetto was a 3-mile square area, filled with over 400,000 Jewish residents. The conditions were beyond awful, and only got worse as time went on. People died daily from starvation and wide-spread disease. The only way to stay alive was through smuggling food, bribing guards, and other desperate acts of survival.
In 1942, the Germans began sending Jews by the masses to the Treblinka extermination camp. In just 3 months, over 300,000 people were sent to their deaths.
In 1943, after a rumor of another mass deportation, the Warsaw Ghetto Uprising began. With a feeling of “nothing left to lose,” a group of brave Jews decided to take up arms and fight. They knew that they were up against a war machine; but they also knew that they would rather die fighting than be killed in a German extermination camp.
Their efforts were valiant and heroic, and they were able to achieve some victory. In the end, the majority of the ghetto fighters perished. 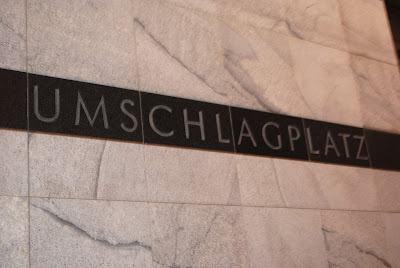 The memorial at the umschlagplatz, where Jews were sent by trains to concentration camps. 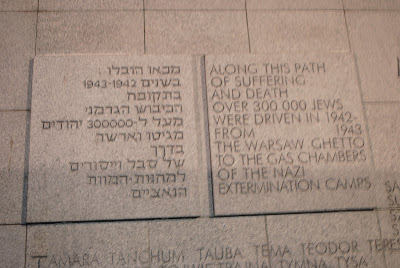 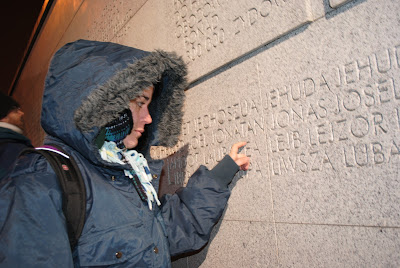