Posted on May 9, 2012 by The Director of Digital Media

Carrie Bornstein (Year Program ’05-’06) serves as the Acting Executive Director of Mayyim Hayyim, and she recently blogged about celebrating the Mikveh’s 10,000th immersion! Mazal Tov to Mayyim Hayyim! Keep up the great work!

You can read Carrie’s blog post below, or at the Mayyim Hayyim blog! 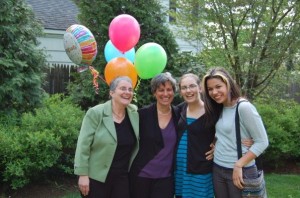 With balloons, family, pictures, and laughter.

Just the sound of it is impressive. I’ll say it again: ten thousand.

One-by-one we counted. Reaching such a milestone, we can’t help but reflect. What does it mean for a mikveh to have touched so many lives? How is the landscape of Jewish Boston different because of the widespread support of a dream?

And in other ways, it’s simple. The answer is in the stories, that each of these 10,000 immersions contains a person’s real-life experience. A person just like you and me: The bride awaiting her big day with nervous excitement. A father who can’t believe his baby is going off to college. The couple suffering through yet another miscarriage. A woman trying out monthly immersion in a way that feels safe to her.

And so we pause, in this moment between past and future. We celebrate our ten thousandth immersion: Charlotte, a girl becoming a Bat Mitzvah. This isn’t her first visit to Mayyim Hayyim. It isn’t even her second. She first came here as an eight-year old when her mother converted to Judaism. She and her sister immersed too, to formalize and affirm their Jewish identity. That same day, her other mother immersed in celebration that they were finally all one Jewish family together. Months later Charlotte accompanied her sister as she immersed before her Bat Mitzvah. And in 2012, here they are again.

Their story is extraordinary. And yet, at Mayyim Hayyim, it is completely normal. At ten thousand, we recognize that the dream is now a reality. That 135 sensitive volunteer Mikveh Guides, a community of supporters, and daring foundations have made it all happen. That opening up Jewish ritual to the entirety of the Jewish people, and welcoming them in on their own terms, allows each person to feel exactly what we intended, that “we built this place for you.”

Looking back also helps us look forward. Our work is far from complete and we have exciting plans in store. Onwards and upwards: to 20,000!