Posted on October 29, 2012 by The Director of Digital Media

What is prophecy? Who are prophets? Traditionally, prophets have played the role of messenger of God. They are God’s mouthpiece, communicating their revelation to mankind–at once an onerous responsibility and an unpleasant task. The prophets of the Bible are unhappy creatures, driven mad by the intimate presence of God and made a conduit to all the world’s suffering. Furthermore, they are often in harms way, since it is their main duty to bring an unsavory message to a corrupt people. In many cases, they must act alone in defiance of authority. Prophets then meet their holy mission as martyrs–lonely, tormented individuals with a high likelihood of being castigated by society. 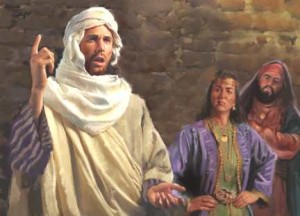 Yet the prophet is the most revered figure in history (even though their holy work is usually only exalted in retrospect). Society may admire the celebrity since she demonstrates excellence, the highest reaches of human performance. The honor bestowed upon baseball players, musicians and actors is a celebration of the latent power in humans, the possibility of human transcendence and perfection. These are the archetypal men and women of action.

Accomplishments in thought also receive high honors, and those that carry forward the legacy of rational activity and human mastery are awarded accolades. Thinkers–great scientists and philosophers–are the second honorary members of society. Individuals of thought and action, representatives of our highest achievements of mind and body, are the great figures of human history.

Yet one thing is missing: the soul. For the soul corresponds to God and though humans may feel ennobled by full expression of their powers, ultimate dignity and worth can only come from a higher authority. The prophet combines perfection of thought and action into character and vision. They are more than individuals, representing the highest wishes and strivings of humanity, and thus their powers are not limited as those of the individual.

Whereas the baseball player may be an oaf off the field and the professor no more than a provincial cobbler of reason, the prophet, by devoting his life to higher impulses, becomes the chief architect of the world. He dons Godly truth–virtue, courage, compassion, enduring strength–and embodies the calling with every ounce of being, part and parcel of God.

Look around you. Who are the prophets today? Who is suffering and sweating and rejoicing on my behalf? Everyone has vision, but who has courage to act? Where will prophecy begin anew?