Creation of the Third Story (Mediation in the Chumash) 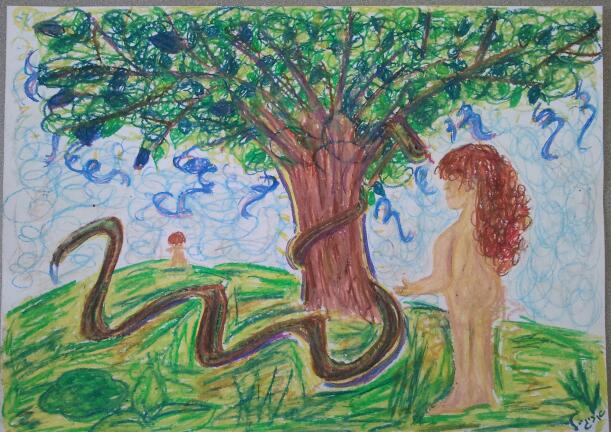 I drew this picture as part of a unit summary in Daniel Roth’s Chumash class; Mediation in the Chumash. We spent a couple of weeks learning through the Adam and Eve story including an exhaustive study of the meforshim (both modern and classic as well as many in-between). At the end of the unit (as usual), Daniel challenged us to create what he calls a “third story”. In mediation terms, the third story implies an alternate version of the narrative to which each character could sign on, agreeing that the story’s author gets them. We were then challenged to look at the text from the perspective of Adam, Eve and the snake and create a picture or a piece of writing where each character is given the opportunity to defend his or her actions.

Staring at the blank piece of paper, I decided to follow my own teacherly advice and just put anything down, just get that hand moving, and let your subconscious do the work. Often getting one’s hands moving, is a great way to put the intellect (and self-judgements, read: “this isn’t art…its terrible…you can’t draw…it will never be right so why start…you call yourself an artist…etc..) to rest. And so I began to draw a large tree in the middle of my paper. I should also make it clear that at the outset, I had no idea of the picture that I wanted to create or any vision of how it would end up. Therefore most of the following thoughts came mostly after I stepped back to look at the finished piece, or during…

I knew at the outset that Eve would be the main central character and that Adam would be a very minor bleep in the background, if present at all. So, after the tree, I drew the shape of a woman, standing naked and alone. In showing the back of her head, rather than her face and her hands reaching out, I tried to convey some of the ambiguity that she might have felt as she weighed her current existence with her future and potential one, an existence where she could exist within the knowledge that the tree offered and share in the secrets of the world, and all of the consequences that this new existence would bring. Perhaps this is the influence of Bereshit Rabbah on me, where Eve is seen as wanting to be like God himself, and create her own worlds. Bereshit Rabbah sees this as a negative thing, as if Eve wanted to challenge God. However I disagree, as imitation is the deepest form of flattery. In my picture, therefore, she is a woman, standing alone, on the precipice of a new life, considering what could be, considering the end of her childhood, so to speak, knowing she will never be able to go back home again. So what is her defense? Does she need one? Haven’t we all been there, knowing that the decision we are about to make will surely change our lives forever and will definitely be painful, but knowing that we will make it anyway? Eve needs no defense. The human being’s desire to constantly be innovating, improving, growing (despite the pain) is her defense.

As for the snake, what is his story? his defense? Wrapped around the tree, and in some places indecipherable from it, he is the keeper of this gate to this new world, so to speak. If he has not experienced this knowledge, he at least knows what is represents, enough  to be motivated to sell it to Eve. Every educator that has something to teach, wants to teach it. To pass on their knowledge and see what the next generation will do with it. The purple halo surrounding the tree and the snake then, for me, represent the mystical world-knowledge that the snake is aware of and wants to share with the world.

And Adam, the absent partner in this case, can only be accused of neglecting his partner, so that she is, in a sense alone and vulnerable. He is out taking care of the world (doing what God commanded him to do) and by his own naivete assumes that Eve does not need his presence to share the warning regarding the tree of knowledge (a warning that Eve only received if at all through Adam rather than directly from God – since she was created after Adam was told not to eat from the Tree of Knowledge).

So is my representation biased? You bet it is, decidedly Eve comes out the cleanest, then the snake and only sort-of innocent is Adam. Of course, decidedly absent is God in the picture (as Daniel pointed out to me). So the question is why and what would your picture look like?

You can join me at my studio for the Artists Beit Midrash on Tuesday nights and explore what you are learning, or any other ideas you wish, through various art mediums. The cost is 65 NIS for the 2 hour session including materials (regular price for the public is 75 NIS). A trial session is 50 nis. If you are planning on coming, please send me a text message so know to be prepared. Space is limited, first come first served: 054-626-8496. Bring a beverage of your choice and any creating music that inspires you.