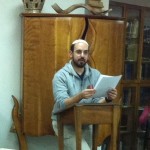 I shared the following vort at night seder tonight:

Parshat Vayeitzei opens and closes with Ya’akov erecting a מצבה (monument) made of a single אבן (rock). These scenes beautifully bookend a significant period of Ya’akov’s life, during which he builds his family of twelve children (Binyamin hasn’t been born yet) with his two wives and their two maidservants.

Rashi picks up on “וַיִּקַּח מֵאַבְנֵי הַמָּקוֹם” (and he took one of the stones of the place) in verse 11, and comments:

In other words, many stones converged together and dissolved into the one stone, which Ya’akov used to build a monument to commemorate his covenant with Hashem.

Rashi comments on the word “לְאֶחָיו” (unto his brethren) in verse 31:46:

After all, Ya’akov only had one brother (who wasn’t even present in that scene) so he must have been speaking to somebody else.

Ramban wrote that Ya’akov was speaking to “לאחי לבן” (Lavan’s brothers), and Radak suggested that this meant:

In the first case, the testimonial was as simple as could be: a single rock sufficed, and multiple other rocks were absorbed into it (Rashi), thereby simplifying even the selection of an appropriate testimonial. Hashem knows each and every one of us – and is always ready to accept us.

However, in the case of the covenant between Ya’akov and Lavan, the households of these two men had to participate in building a second testimonial to their covenant (a heap of rocks) along side the monument that Ya’akov erected himself. The importance of these two testimonials (Ya’akov’s monument and the nearby heap of rocks) can be found in verses 31:51-52.

Agreements between people always affect others; it’s unavoidable. Whereas Hashem is endlessly available to all of mankind equally, people are finite – and interconnected with one another.

Interpersonal relationships do not exist independently of one another, and how much more so with intrafamilial relationships. By the time Ya’akov had built a family, testifying to a covenant with Lavan could only be a complex matter because of all the others – in Ya’akov’s & Lavan’s households – who would be affected by their agreement and therefore also had to be given a say.