Women of the Wall Up Close 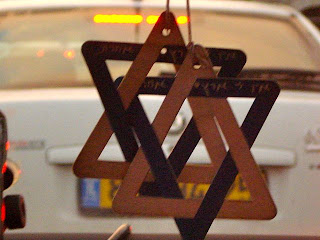 Hanging in the rearview mirror of my cabdriver on the way to the Kotel.
It says, אין לי ארץ אחרת which means, I have no other country.

I need to start by saying that I love Israel, I am a zionist and I also believe in egalitarian Judaism. I am still able to love Israel, even though there are a number of problems related to how much sway the religious right has with the Government of Israel in general, and the Kotel in particular.

Some where along the way, the Kotel went from being one of the symbols of Judaism to being a synagogue policed by Haredim. People who go to the Kotel are told how to dress, what ritual objects they are allowed to bring, how they are allowed to pray. The bottom line is that Haredim refuse to recognize that there are other ways to be Jewish. This is something that needs to change, especially if progressive Jews want to be able to go to the Kotel without leaving with a bitter taste in their mouth. Woman of the Wall is an organization that is working to change this, even if their only protest is to pray loudly and try to wear their tallitot and tefillin at the Kotel.

The following is my account of what took place on Friday morning, December 14th:

I arrived by Taxi at 7 AM. At that point a few people were already there, I learned that the officer at the gate decided that the group could not enter with their siddurim (prayer books) and tallitot (prayer shawls). A few minutes later, we were told we could bring the siddurim, but not the tallitot. We waited until Anat Hoffman, other board members arrived, so we could hear how we would deal with this ruling. At this point we were group of about 40 woman and supporters. There were gap year students on RSY Netzer, people who I recognized from Shirah Chadasha and Sod Siach (two of the places I may daven on Shabbat), other students from Pardes and visitors from other places. There were a couple of reporters including one from the AP with a camera man. The decision from the board was that we would enter the plaza and daven as planned, but that everyone who wears a tallit would hand it to the police officer and explain what wearing a tallit means to them. This process took about an hour. As we were waiting we sang, we did get some looks and a couple of hecklers but nothing too extreme.

We proceded to the women’s section and stood all the way at the back with the supporters standing above us on the plaza itself. .

Edit based on comment below: Rachel Yeshurun told me that she was detained, “when I refused to part with my tallit at the security entrance. I told the officer that I insist on entering with my tallit – and he said well in that case you will be detained”. If anyone has more accurate information about the other three I would be happy to hear about what exactly happened.

These four were detained by the police. There was also one woman who started to put on her tallit, an officer came over and said, “come with me”, she gave it to him and was not detained. We were there though Hallel (a special set of prayers that are said on Rosh Chodesh and other holidays), then we moved to Robinson’s Arch for torah reading and the concluding portion of the service.

I did my research, I know that it is against the law in Israel to discriminate against someone’s religious practices. Apparently, the Kotel is a special case? I am not naive enough to believe that I will be able to pray at the Kotel in a fully egalitarian service. I do however believe that women should be able to pray as loudly as they want, with their tallit and tefillin, if they choose to.

For more information on the Modern History of the Kotel, I suggest looking at this Article by Rabbi David Golinkin, that examines the following questions: