We were all awake long before we finally received the email from Pardes to tell us that school was canceled. We all knew, there was a blizzard coming down outside our windows! The city had already shut down the afternoon before because of some hail. We quickly rallied and got a group together to head to the Kotel. We were told that we couldn’t miss a white Kotel.
We trudged down Derech Hevron all the way to the Old City…actually, it was sunny and we were throwing snow balls at each other! We went to the overview where the following picture was taken. Then we went to the Kotel. 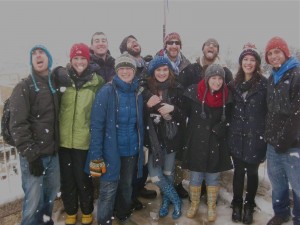 Our brave and AWESOME group! 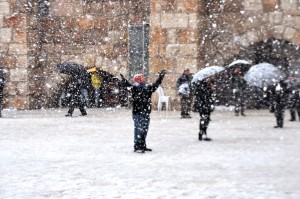 My friend, Ilan, so excited to be praying at the Kotel in the snow! 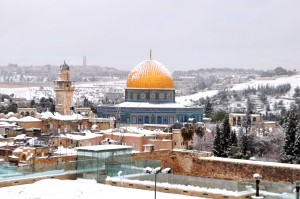 Dome of the Rock…I know many people don’t like your location, but you’re still gorgeous. 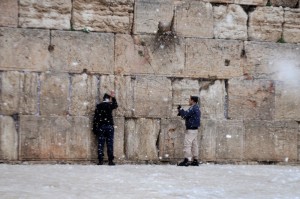 Two soldiers taking pictures of each other as I walked down to the men’s side.

Yes, you read that correctly.

I asked my friend AdAm, what he thought if I would just walk all the way down on the men’s side of the kotel. Obviously it was an exceptional day, and there weren’t guards at the kotel at 9am in a blizzard. And most off the men were inside for the Torah reading, since it was too wet to bring the Torah’s outside. I asked him if I looked like a girl because I had a hood on and a scarf covering most of my face. He laughed and said yes, but if you keep your head down, no one can see your face anyway.
So I slowly made my way to the men’s side. I stopped and watched men dancing, then once I felt that AdAm was close to me. I headed for the wall. My heart was beating fast and my legs started to shake, but then, I was there. My lips and forehead on the wall and… it was amazing. Prayer flowed easily from my mouth, and then I heard a nigun (song without words) start a little down the wall…obviously men were singing, but I felt like God was singing for me, and so happy that I was there at the wall. The nigun was beautiful, and I heard AdAm chime in and I saw my roommate Joseph close on my left from the corner of my eye. I relaxed a little, knowing I was surrounded by my friends. I prayed a little more, took in the nigun, held back some tears, felt the snow falling heavily on my shoulders. I felt the world was perfect in this moment. And so not to overdo it, or take the moment for granted, I lifted my head just enough to see AdAm, and we walked out together. It was by far one of the most amazing moments of my life. 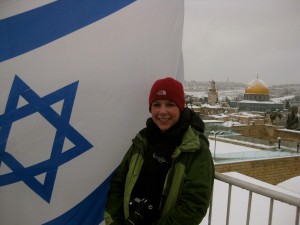 I am so happy living in Jerusalem, studying Torah, and loving life!