Posted on January 11, 2013 by The Director of Digital Media 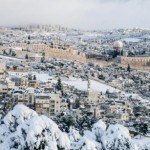 Jerusalem in the snow. Photo by Anna Sheinman

Well documented in Facebook photos and through the news outlets are the rain and snow that have fallen throughout the State of Israel over the last several days. While Jerusalem has not seen snow like this in nearly 20 years, areas of the North received well over a meter. Although the snow and rain have caused some disruptions in travel, as well as property damage and flash flooding.  Despite any negative effects, Israelis have generally welcomed these gifts falling from the sky. The precipitation is welcome news for the Kinneret whose water level has increased by at least 35cm this week.  In Parashat Va’eira however, what fell from the sky was entirely destructive for the Egyptians as God’s might was on full display.

God sends hail to plague the Egyptians in an effort to show the power of God to the Egyptians and Israelites. We could also interpret the hail as a punishment of Pharoah on account of his preventing the exit of the Israelites from Egypt. Either way, chapter nine verses 22-24, describe the destruction wrought by the hail:

Most significantly is the use of the root מטר  in verse 23. Throughout the Tanakh, specifically in the prophetic books, this root is used to denote that God is sending rain, as opposed to just ordinary rain that falls upon the land. In other words, perhaps there are ‘natural’ rains that fall in the rainy season, and then there are climatic events that can be attributed to the breaking of ‘natural’ order, which are at the hands of God, such as the fiery hail of the parasha. Whether or not we conceive of those instances of extraordinary weather as proof of the effectiveness of prayer to God should remain part of personal theological discussions.

Based on the usage here it might be easy to assume that every time something is מטר (sent forth) from the sky drastic results occur. I would like to supply two examples that instead of proving the damaging effects, the word מטר instead indicates the involvement of God in the lives of God’s people. In the petitionary section of the amidah we make a request, “תן טל ומתר לברכה” (Give dew and send rain for a blessing), which acknowledges the lethal potential of rain, while still conveying the understanding that it is God who ultimately sends the rain. Thus we are beseeching God’s rain bringing power to overcome any shortcomings or dangerous surpluses in the rain (or snow), that would have fallen without Divine intervention.

Secondly, as we will read in a couple of weeks, the Israelites are sustained in the desert for forty years by the grace of God. God provides food for the entire nation on their arduous journey from Egypt to the Promised Land. What does God provide? Mana. The story in chapter 16, as well as Rabbinic Literature, goes to great lengths to understand exactly the nature of mana. Psalms 78:24 however, provides the best indication of Gods intervention, “And He caused manna to rain (וימטר) upon them for food, and gave them of the corn of heaven,” a perfect example of God taking note of the Israelites and intervening on their behalf (again) again facilitating their survival. While the snow, to which mana is also compared, was falling I attempted to catch the flakes. Regrettably the flakes did not have the qualities ascribed to the mana, fortunately they also did not have the qualities ascribed to the hail of our parasha.

We hope that with every mention of מטר in our prayers that we can kindle the intimate relationship between Man and God seen in these chapters of Sefer Shmot. As winter in Israel progresses, we hope to be the recipients of rains which are sent forth by God onto the land and onto God’s people. May the rain drops not be destructive like the hail of Parashat Va’eira, rather may they land softly like the snowflakes to which we awoke this morning.