Sometimes, a simple touch can make all the difference. 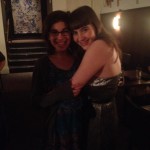 Hugging one of my best friends.

In high school, I thought nothing of it. I hugged my friends (girls and guys) and high-fived with abandon. The one time I was asked to go out of my comfort zone was when playing Anne in The Diary of Anne Frank. Every knows about Anne and Peter, and my director had the specific idea that the kiss had to be long – very long. He instructed us to “practice” on our own for a few weeks, then start performing the kiss during rehearsal. By the time opening night rolled around, we were pros. It was even kind of fun. After the initial discomfort had subsided, I had no problem with the kiss – it was for the sake of art and for the sake of Anne.

If I was asked to play that same part today, however, I would not be able to give an easy “yes.” Sure, I still look like a fourteen-year-old, but throughout college my outlook regarding touch has changed a great deal. As a freshman who frequented (lived at) the Maryland Hillel, I slammed head-first into a whole new concept: shomer negiah (not touching members of the opposite gender unless he or she is your spouse, child, parent or sibling). Sure, I’d heard of it, but I’d never met people who actually did it. Those people were supposed to exist in an abstract world of super-religion – they made sure to say one-hundred (and ten!) blessings a day and meditate for an hour before prayer. But all of a sudden, the abstraction was looking me in the face. And it looked a lot like a normal college student.

I had to be constantly on edge when around Jewish males. Whose hand could I shake? Whom could I high-five? Who could I (gasp) hug? I ended up resorting to greeting guys with a general wave, thereby saving whichever guy it was from stepping backward while giving me that awkward “sorry-I’m-shomer” look. 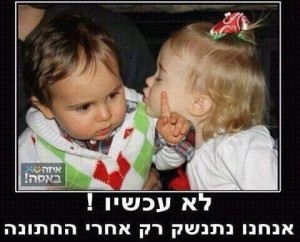 “Not now! We will kiss only after the wedding.”

After two years of this nonsense, I decided I had to try it myself. So I did. Looking back, my new status didn’t change my behavior all that much (I had never been a flagrant male-hugger). I stopped high-fiving and gave up hugging the two guys I used to hug who also weren’t shomer (they were really tall, so honestly, not hugging them was kind of a relief). And that was that. The bigger deal was that I told people I was shomer, fully accepting the label upon myself. 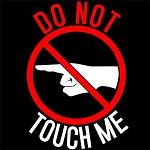 After two months of this shomer period, school was out and I began learning at Drisha, a co-ed Jewish learning center in New York City. At Drisha, I was shomer from the start (I was also wearing only skirts at this stage, so that projected another layer of “don’t-touch-me” onto everything.) Almost everyone at Drisha was shomer, so everyone did the awkward wave or head bob upon meeting – neither a hug nor a handshake could be seen (except for squealy girl embraces and manly post-morning-coffee hand clasps). Soon, I realized that this small difference greatly affected people’s perception of me. She doesn’t touch, she doesn’t wear pants, she’s in the Upper West Side – she must be FFB (frum from birth).

But I’m not. And I don’t like people thinking that I am. I once had someone ask me, “Are you uncomfortable talking about your less religious background?”

Of course I’m comfortable! I wanted to shout. I’m more than comfortable! I’m proud of it! I can’t say how grateful I am that my parents raised me between denominations and taught me to accept different types of Jews! In fact, I’m so comfortable with my background that I could write a friggin’ book about it and YOU would be first person whose hands I would shove it into!

So that was the end of shomer negiah. 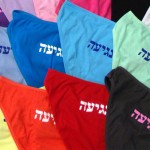 It was only three months – a short foray into the world of extra space – but it changed the way I think about touch between genders. I didn’t go back to hugging my guy friends at UMD. I high-fived only occasionally, but the main thing was that I had dispensed with the label. I am not shomer negiah, but I am very conscious of whom I touch, and how. I believe in modesty and I like the idea that we should be aware of whom we touch. But if I had boyfriend, I would not want to be shomer negiah, which is why I cannot take the label fully upon myself.

But what about halakha? you ask. Well, to put it bluntly, I guess I am a Torah-denier. Halakhah is valuable, but I cannot follow it all. At least not right now.

So this brings me back to the present. For the past few months, I’ve been around new people; surprisingly, I am finding that I spend a good deal of my time with males – whom I don’t touch all that much. So basically…I miss my oxytocin. Oxytocin, otherwise known as the “cuddle hormone,” is a natural chemical that upsurges when we experience human touch and, oddly, when we eat chocolate. With my family far away, and most of my close girl friends just as far, I have had very little human touch in the past few months – and I am starting to realize that I miss it.

Last night, for example, I was at a Shabbat meal with four girls and three guys. We continued singing into the evening, and some of the songs were only in select song books. I sat next to one of the other girls on the couch to read the words. My right side was touching her left side, and, just like that, I felt a little happier.

Touch does not have to be sexual, nor does it have to be constant. But it has to be there. We’ve all read the studies about Romanian orphans who are deprived of touch in their early years, and the psychological damage they suffer afterward. Touch is comfort; a sign of care. Be discriminating, but don’t wrap yourself in ice. Give it when you know someone needs it, and the oxytocin will soar – for both of you. 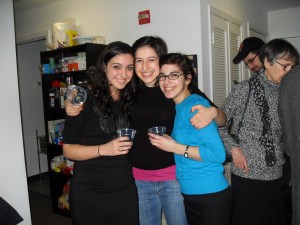 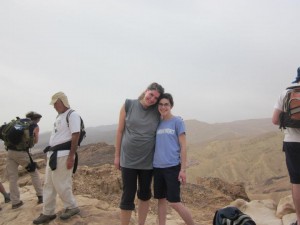 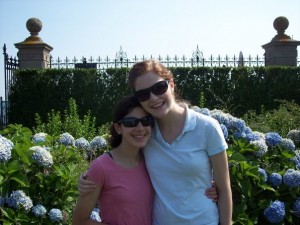 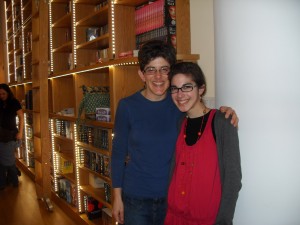 And with their mothers. Even if her eyes are closed.
I love you, Mum!