[Alumni Guest Post] Who is Allowed to Study Torah?

Posted on March 1, 2013 by The Director of Digital Media 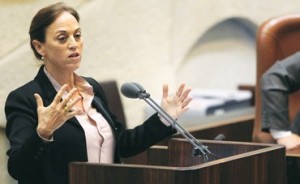 I had never watched an inaugural Knesset (Israeli Parliament) speech before Dr. Calderon’s (Hebrew; English). However, I, and many in the Jewish world, watched new MK Ruth Calderon’s speech with interest. A member of the rising Yesh Atid (There Is a Future) party, Calderon had already made a name for herself as a secular Israeli who was deeply interested in — and, after receiving a PhD in Talmud from Hebrew University, qualified to teach — Jewish texts. While much of the reaction to her speech has been positive, not all segments of the Jewish world are happy about the symbol of a secular women teaching Talmud (as Calderon did during her speech) at the Kneesset. This article is quite critical, citing various halakhic sources to show that only the traditionally observant ought to have access to canonical Jewish texts.

I understand the sentiment behind this backlash, though I am harshly critical of it. In a world where halacha reigns supreme, many modern sensibilities are seen as threatening. Canonical Jewish texts, on this view, are not literature to be studied by just anyone, but sacred texts that cannot be approached merely for intellectual study, but must be approached with the goal of learning how to live our lives according to the Torah (in the broad sense of the term).

My problem with this view, when it comes to who has access to Torah, is that there are multiple views represented in canonical Jewish texts on this issue (as with most issues the rabbis grappled with). I want to look at a couple of examples, which I think should be included in a more nuanced discussion of how the rabbis — and, by extension, Jews today — have grappled, and ought to grapple, with the issue of who should be included in the ‘tent’ of Torah study.

There is a story that R. Jannai when once walking on the road, saw a man of exceeding effusiveness who said to him: ‘Would you, Rabbi, care to accept my hospitality?’ R. Jannai answered: ‘Yes,’ whereupon he brought him to his house and entertained him with food and drink. He tested him in [the knowledge of] Talmud, and found [that he possessed] none, in Haggadah, and found none, in Mishnah, and found none, in Scripture, and found none. Then he said to him: ‘Take up [the wine-cup of benediction] and recite Grace.’ The man answered: ‘Let Jannai recite Grace in his own house [i.e. feel free to recite Grace here, as if it was your own home]!’ Said the Rabbi to him: ‘Are you able to repeat what I say to you?’ ‘Yes,’ answered the man. Said R’ Jannai: ‘Say: A dog has eaten bread with Jannai.’ The man rose and caught hold of him, saying: “You have my inheritance, which you are withholding from me!’ Said R. Jannai to him: ‘And what is this inheritance of yours which I have?’ The man answered: ‘Once I passed a school, and I heard the voice of the youngsters saying: The Law which Moses commanded us is the inheritance of the congregation of Jacob (Deut. 33:4); it is written not ‘The inheritance of the congregation of Jannai’, but ‘The inheritance of the congregation of Jacob’ (9:3, Soncino translation)

I think this story makes it abundantly clear that at least some voices in early rabbinic Judaism viewed it as extremely rude, at best, and misreading a verse of Torah, at worst, to not assume that the Torah and all of its teachings are every Jew’s birthright. One of Hillel’s less famous teachings echoes this message:

I understand this Mishna to be teaching that, not only is it incumbent upon all of us to continue learning — i.e. we cannot say, at any point in our lives, that we are ‘done’ learning — but that, if we do not share our learning properly, by teaching others whenever they ask (Rashi), we will pass away, either literally or in the sense that our lives will be less meaningful. Hillel here is talking about individuals, but the lesson can be applied to the communal level as well. In today’s Jewish world, the Orthodox hold the vast majority of traditional Jewish knowledge, and efforts like those made by MK Calderon seek to restore an equilibrium. Just as Hillel thinks that each individual must share the Torah they know, so too the Orthodox community has an obligation to share the Torah they know with the rest of the community.

I am not hoping to change anyone’s mind in this debate, but rather to more closely exemplify the Talmudic ethos by approaching this complex issues honestly, admitting that there are many truths here, expressed both by the rabbis and by other Jewish and non-Jewish thinkers. While I understand that halacha must be precise and decisive when it comes to certain aspects of Jewish life (e.g. laws of Shabbat, Kashrut), the bigger questions that face us in defining Jewish identity are not meant to be closed and treated as simple matters of מותר or אסור (permitted or forbidden).

For more discussion of this issue, see:

A more muted form of criticism, coupled with recognizing the benefits of such a development

An honest Orthodox appreciation for the void Dr. Calderon, and those like her, are filling