If anyone has not yet visited the Hadassah Medical Centre at Ein Kerem it is an absolute must!

I had a personal reason to visit the hospital this morning. In 2006 I was diagnosed with Retinitis Pigmentosa, a genetic blindness disorder, during a routine visit to the Optometrist’s office. Since that time, doctors have scoured my DNA genome for the presence of a mutation that might be responsible for my genetic disorder. Today, I received new hope that I might soon know where the mutation in my genome lies. At noon today, I gave three blood samples for mutation testing to a lab that has achieved a 33% success rate in the identification of mutations among RP patients of Ashkenazi descent. 33%!!!! None of my previous testing has come even within the same stratosphere as that kind of success rate! Here’s hoping that something will come of it! 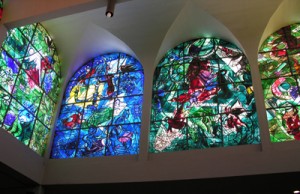 The other major reason to visit Hadassah Ein Kerem is for the Chagall Windows. I had seen the windows in pictures many times before, but trust me, it is something completely different to see them in person. The Chagall windows are all present as the walls of Hadassah Ein Kerem synagogue, where they actually have services every week for Friday night and Shabbat (it would be so amazing to doven in that space). The windows have so much detail, the longer you look at them the more you see!

So you really do need to visit the Hadassah Hospital in Ein Kerem!

Have a good evening everybody!