Literally running into (or rather, alongside of) DLK‘s team of 10k Jerusalem Marathon route walkers this past Friday morning reminded me all over again of the thrill that was the morning of March 1st – the Jerusalem Marathon. Although I do have to say that as beautiful as the walk must have been a week later on such a glorious day, I was very happy to wake up to a cloudy morning on the day of the race. The chillier the weather, the less chance there is of an unhappy stomach during a run.

As I told DLK and some other listeners by the coffee station last week, I have never done anything in my life about which people were still talking excitedly so many days later. I’ve realized what was so novel to me about this reaction: I do not remember a time where I have been widely congratulated for something I did physically, not mentally or academically. 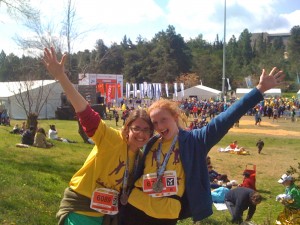 Whether or not people had still been discussing it, a week and a day after the Jerusalem Marathon, I would still be filled with pride for the feat my body performed across 13 miles of up and down, cobblestone and asphalt. I still cannot really believe it is mine, for although Kayla and I trained for over a month using the route of the race, during those 2 hours and 16 minutes, my body was propelled by something more than leg and core muscles, carefully paced heartbeat and breath control. I moved through a city cleared of everything except human energy, emanating both from those who pushed forward physically around me and those who stood stationary, pushing us forward with energy from within:

It won’t ever feel the same in any other language.

My memory always stores snapshots. Below are some that I will be able to call up whenever I need to borrow some previously generated endorphins.

At the start line of the race, amid the people on stilts representing various world countries, a man’s voice blasted:

and then, in English, counted the minutes, every five, down to the “take-off” of the half marathon. Take-off sounded very odd, yet strangely appropriate for what we were about to do. This runway for humans was incredibly crowded, and incredibly colorful, and every so often, a small group of balloons would sail over our heads into the gray sky. When the head of the Jerusalem municipality climbed onto the stage and shot the gun, his whole hand disappeared in smoke and the first few drops of rain fell just on time. Immediately after we crossed the start line, I could see up the hill ahead: just solid runners filling the wide street.

We went through the tunnel off of gan sacher and everyone I heard tested the echo. I thought of Yom Kippur in Jerusalem again. A city cleared of cars. But for a very different reason.

A very old couple stood on the side of Eliezer HaModai – the steepest hill just a few kilometers from the end, and the one for which I had saved my second GU gel, chocolate flavoured – the woman’s face was very round and very beaming, and she was clapping her hands together without any sound, and her voice of congratulation was so thin that I could barely hear it. But I felt that voice louder than anyone else around her.

I have never been so happy to have someone offer me a partially peeled banana than I was at the food station coming onto Emek Refaim. “Banana, Banana” they were calling out. (In my head, I added ארבע שקל, since bananas will never again exist without the backdrop of the shuk).

Music blasting on the Rekevet had a very catchy refrain:

3 times as a turned around the bend off of the Tayelet.

Little children, some in parents’ arms, lined the crowded streets, pockets of them all with their tiny hands out into our paths. As we ran past they were hoping and hoping for a high five from a sweaty palm. So very expectant, and when I did deliver (gently, as not to break any wrists. they were SO SO small!) a few were filled with such specialness, they wriggled and danced on the spot.

Kayla and I were running for Team SHALVA, and together with the help of Pardes and members of our respective communities, raised 2500 NIS. There were 250 other team members somewhere in this crowd of color. SHALVA is the Association for Mentally and Physically Challenged Children in Israel. It provides free services and a strong support system to families who have children with disabilities, and children are admitted to the program on a first-come-first serve basis regardless of ethnicity, religion, or financial status. The organization provides support for children and their families from the child’s birth to his or her early adulthood, and its goal is to help these children get to the highest level of independence possible. Although we did not see each other, I learned at the end of last week that Rabbi Michael Hattin and his entire family ran and walked for Team SHALVA. I have to say as a member of his great Shmuel 1 class – we were in some good company. 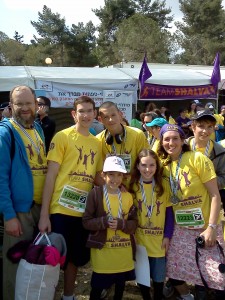 Michael Hattin and his family also ran for Team Shalva!

Sometimes another team member would surface beside me during the race, in a yellow shirt with purple people dancing, and we would share a moment that might never have existed save for our mutual interest in running, and an appreciation that there are many people who – as a moved mother shared during the pasta dinner the night before – feel as if everyday life is a marathon, either literally or figuratively. I have been running seriously since I was 12 years old, and was never given an opportunity to really consider what such an activity might represent to anyone else. But during this process, I came to realize that what I do with my legs and feet, the stretches I did at the end of each run, especially watching my protein and carb intake during the last weeks, could stand for much much more than my own body. I could be a symbol to raise awareness and provide support for some of the bravest families, most of whom I will never meet personally.

As I became more sensitive to my physical strength than ever before, I know that this was, and still is, purely my inner power. But it exists beyond my muscle and skin as well. I felt a change that was manifested to an unbelievable, tangible height during the last burst up the hill to the finish. Throughout the whole of the run, I gathered up smiles and shouts of encouragement, only to give them back out to the crowds and those running around me: a cycle of inspiring celebration of the physical human form and what we might reach together that extends far beyond our personal physical limits.