Posted on March 17, 2013 by The Director of Digital Media 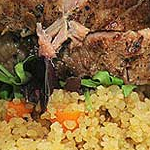 Eucalyptus’s deal is that they only serve foods indigenous to the land of Israel. I had been once before, back in 2006 when my dad was visiting, when the restaurant was located in the Russian Compound and I desperately wanted to like interesting food but stuck with the chicken. The restaurant has since moved to Hutzot HaYotzer, and my palate has matured (thank you, well-bred husband). In the past year or two, a number of friends have gone and have offered reviews ranging from “best meal of my life” to “really good” to “not bad but it’s always empty there” to “really weird.” So we weren’t totally sure what to expect.

The first thing we noticed was that it wasn’t empty there, and as the night proceeded, it filled up. The second thing we noticed was the atmosphere; the restaurant occupies a low-ceilinged stone building, with a smaller room down a half-flight of stairs in the back. Some of the walls are a nice bright blue. AB thought the atmosphere was lacking; I kinda liked it. Only some of the tables had tablecloths on them, which I thought was a weird choice. The third thing we noticed was the wine menu. It was short, with only 5 or so wineries represented, but the wines listed were high quality, and they even had two of my favorite wines by the glass (Nes Harim by Katlav and a Petit Castel). The fourth thing we noticed (or rather, decided), was that we wanted to upgrade our three-course Groupon to the seven-course taster menu. They agreed (though not for a discount, but we got them to throw in two glasses of the house wine – the shiraz from Teperberg;’s “Israeli” series, so not the Katlav or the Castel, alas – on the house when we asked nicely and mentioned it was our anniversary).

Course One
Our first course consisted of bread and salatim – sweet peppers, black-eyed peas, olives, beet puree, lemon confit, and a za’atar pesto. My general feeling about bread is that I love it, and unless it is really bad I will eat it happily and love it. I was not disappointed on the bread front. Of the salatim, the za’atar was the most interesting/creative. The black-eyed peas were also quite tasty, and I liked the beet puree. The lemon confit was shockingly lemon-y and sour – I guess this shouldn’t have been a surprise, but I didn’t really think they’d serve something so unpleasant to eat. I don’t eat peppers unless forced, but AB said they were ok. We’re a strictly non-olive household, so those remained untouched.

Course Two
The next course was salads of a less pureed nature. These included beets, carrots, tabouleh, potato, and something they called ceviche. The beets and carrots were fine but boring – just roasted cubes of beets and raw carrots with poppy seeds. The tabouleh had cilantro in it, so none for me (I never claimed not to be picky), but AB gobbled it right up. The potato salad was excellent, seasoned with parsley and lemon juice. The ceviche was not actually fish but vegetables with ceviche flavoring. I didn’t love it, but it was the most creative effort here.

Course Three
Here we moved on to a heartier foods- eggplant baladi with tehina and pomegranate seeds. This was one of our favorite dishes. When done well, the eggplant is roasted to perfect mush, and the flavor blends in with a rich tehina. This was done well, better even. This tends to be a very heavy dish, and Eucalyptus perfected it by adding the pomegranate seeds, which provided refreshing pops of lightness and spark, complementing the heaviness of the eggplant and tehina.

Course Four
After the eggplant, we were back to salad, specifically a hubeza salad bathed in garlic and lemon juice and tehina. I admit that I was skeptical when the waiter introduced this dish. I mean, hubeza? I’d never actually had hubeza, but it’s a weed that people ate in 1948 when Jerusalem was under siege. That sounds … not so great. But this dish? It was amazing. As far as I’m concerned, slather something in garlic and voila – heaven. AB wanted to pace himself since he knew the big courses were still to come, but I couldn’t help it – I eagerly finished every last piece of my weed.

Course Five
Soup. We got three little glasses filled with three different soups – Jerusalem artichoke, tomato mint, and lentil. The soups came with a side dish of midrash. The lentil soup was neither red nor stew, yet it was meant to be the red lentil stew Jacob served Esau in the Bible. “You know that stew wasn’t actually red,” our waitress explained. “The text just says red because Esau was so angry he was seeing red.” Right. In any case, the lentil soup was ok. The Jerusalem artichoke soup was much better, though AB was concerned about its stringiness. The tomato mint soup won – thick, flavorful, red.

Course Six
The sixth course was the entree course (in the British sense of the word; in America I think we call it appetizers?) and there were two dishes: stuffed figs and duck pastis. The stuffed figs are one of their signature dishes, and we heard about them before we went, and for good reason. Stuffed with chicken and covered in tamarind sauce (so say my notes, though I remember more of a pomegranate flavor), they were tender and sweet. I might have to revise my stance on figs. The duck pastis should have been a highlight too. It was certainly well presented, two cigars filled with duck meat. But AB found the cigars too oily (me: how can something be too oily?, though I did concede that maybe meat cigars are more at home at a steakiya than a house of fine dining, but then again, duck!). I found the duck too fatty. Not Eucalyptus’s fault that I like duck more in theory than in practice, due to the fact that I can’t handle fat. (Oil, yes, fat, no. Hmm).

Course Seven
Another two-parter, this time the mains. First was veal meatballs with okra. I remember liking the meatballs, though sitting here three days later I can hardly remember a thing about them. I didn’t even bother trying the okra. The last dish was Eucaplyptus’s piece de resistance: makloubeh. In case you don’t know, makloubeh, which means something like “flipped upside down,” is a Palestinian/Iraqi/Persian dish of rice, vegetables, and chicken. It’s all cooked together in one pot. At the restaurant, they make a big show of bringing out the pot and then flipping it over onto your plate at the table in front of you. I may be too cynical, but I wasn’t too impressed with the performance. This is probably because I’ve made makloubeh myself and know it isn’t actually that hard to do; my guess is that most diners there have never heard of it. In any case, performance aside, the dish actually was quite tasty, and the chicken and vegetables were expertly boiled so that they melted in your mouth. Or mine, rather.

Dessert
Dessert was not included in the seven-course menu, but we decided to go for it anyway, ordering the special of baklava cigars in meringue sauce. This was not a mistake. Let me say that again in case you didn’t catch it: baklava inside fried pastry dough placed atop a creamy sauce made out of egg whites and sugar. Yum. Dessert also came with tea with nana on the house, as well as unlimited homemade arak on the house. One final item for the list of foods I don’t eat: arak. But AB says it was pretty good.

I think overall I enjoyed dinner more than AB did, though he did say Eucalyptus would be on his top ten of Jerusalem restaurants. With a few exceptions, most of the food wasn’t overly creative (unlike at more serious gastronomic restaurants like 1868 or even HaHatzer or Ma’alot), but it was all very, very tasty, and the chef did a good job sticking within his parameters of indigenous Israeli foods. We’ll probably be back – but not before sampling everything else out there.