The sunset this evening brought an end to my thirty days of wearing tzitzit. Like any Jewish ritual/mitzvah that I have taken on, I started out by “trying it out.” So I thought this was a good approach to wearing tzitzit also. Thirty days, why not? They say that is how long it takes for something to become a habit. 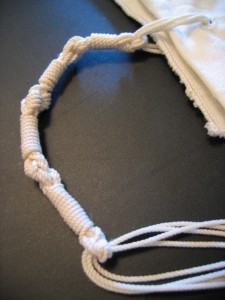 Traditionally, only religious/observant men wear tzitzit. It is commanded in the Torah to wear fringes on your garments. And tzitzit is how it is been interpreted throughout the generations. Wikipedia says:

The Torah states in Numbers 15:38: “Speak to the children of Israel, and say to them, that they shall make themselves fringes on the corners of their garments throughout their generations, and they shall put on the corner fringe a blue (tekhelet) thread.” Wearing the tzitzit is also commanded in Deuteronomy 22:12: “You shall make yourself twisted threads, on the four corners of your garment with which you cover yourself.”

Fringes, tzitziyot, today are attached to the tallit and tallit katan. The tallit katan itself is commonly referred to as tzitzit. According to the Torah, the purpose of wearing tzitzit is to remind Jews of their religious obligations. In addition, it serves as a reminder of the Exodus from Egypt (Numbers 15:40). The Talmud equates its observance with that of all the mitzvot. Maimonides (Commentary on Pirkei Avot 2:1) includes it as a major commandment along with circumcision and the Passover offering.

I wanted to see if I too would be reminded of my religious obligations, or as a reminder that I too was a slave freed from Egypt…if nothing else, maybe it would remind me to be nicer to other people.

So a month ago, I bought tzitzit…boy size, it was similar to a t-shirt…and I cut it so I could wear it under my clothes. I’m sure it would look weird to wear a t-shirt under a tanktop. It was right before Shabbat, so I wore them to my teacher’s house where I was spending Shabbat. It was exciting! I felt like a had a special secret, that only my roommate and I knew about. I didn’t wear them for Kabbalat Shabbat because you could see them under my dress, but I wore them Shabbat morning to pray and all day and that was really nice to have them on. I felt special, maybe it was like wearing a new piece of clothing that you just bought and wanted to show it off, (even though no one could see them, I knew I had them on.)

I definitely learned that tzitzit are not designed to be hidden under women’s clothing. One day, I wore shorts to school. I didn’t think they were so “short” and anyone who knows me, knows that I don’t wear very promiscuous clothing, but when I tried to tuck the tzitzit into the shorts, I realized that they would come out the bottom of the shorts…was I allowed to cut them? How long did they really have to be? 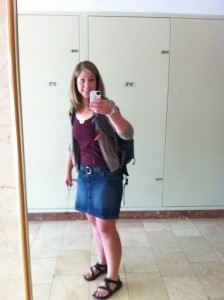 Me wearing tzitzit…I get that you can’t see them…that’s the point.

I didn’t want to have to change my entire wardrobe just to wear them. I asked my teacher at school, “if someone would wear tzitzit, how long do they have to be? Could they be cut shorter…” He said the strings have to be twice as long as the knotted part. Fair…I asked, “but what if they really don’t want anyone to see them, and they are longer than this person’s shorts.” Without batting an eye he said, “Andrea, wear longer skirts…” Hmm…

So, really, I wore a lot of skirts this past month. It was the easiest way to hide them. I know you may be thinking, “Why does she have to hide them?” Well, I don’t like being stared at… it really is a male mitzvah traditionally. I don’t know if Jerusalem is ready for girls walking around with tzitzit blowing in the wind. But it would be awesome if the Jewish world was ready for it.

This past Sunday, my Hebrew birthday, Rosh Chodesh Tammuz…I went to the Kotel to pray with Women of the Wall like I do every month. Because of the violence the month before, when I put the tzitzit on in the morning, it really felt like a bullet proof vest. They were protecting me. Way deep down next to my skin. And at the kotel, I pulled them out. No one in that minyan would be judging me for my religious practices, I was sure of it.

My favorite time wearing them was in my house when I just had them on and nothing covering them. They have big slits up the sides, so it’s definitely not the most modest thing to wear, but in my house it was nice. They were relaxing.

Most of my relationship with my tzitzit was trying to hide them. I would like someone to design tzitzit for women. Then half the battle of wearing them wouldn’t exist because they would lay and fit nicely under clothes.

Not sure what’s going to happen tomorrow…if I will put them on or not. I have basketball in the morning, so I definitely won’t wear them for that..but after? I may feel obligated tomorrow…we’ll see what happens.