On the Eve of Eve in Eden

I am fascinated by the creation story. No, not the one about monkeys. The other one – the one in which Adam and Eve inherit the wind and disinherit the garden. 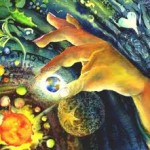 I’m also fascinated by artistic representations of the creation story. Get ready to see a lot of them in this post.

The story is one of beauty and tragedy. The story sets into motion the human concepts of good, evil, man, woman, disobedience, temptation, paradise, punishment. The story is simple yet unendingly complex. The story is full of questions. For example:

Why are there two versions of creation – one in Chapter One of Genesis and a second in Chapter Two?
Why did God create man before woman?
Why did God let Adam name all the animals instead of just doing it Himself?
Where is Eden?
Why was the Tree of Knowledge forbidden to us?
How long did Adam and Even get to live in the garden?
What was life like in the garden?
Did Adam and Eve have sex in the garden?
What would life be like today if Adam and Eve had not been exiled?
Did God really want humanity to stay in the garden forever?
What was the mysterious “fruit” whose consumption caused the ultimate fall?
What do we have to do to find the garden again – physically and spiritually? 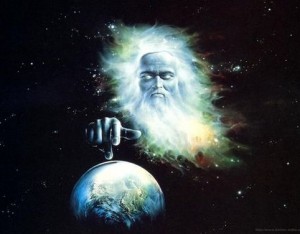 It’s a little too anthropomorphic for my taste, but I have to give the artist credit for successfully drawing God’s hair as a nebula.

In my recent stumblings through dark, damp caves, clutching flaking rolls of sacred religious parchments, I unearthed the Legend of Lilith – a heart-cooling tale that arose from numerous ancient Middle-Eastern traditions. I, of course, unrolled my parchment and explored Lilith’s place in the Jewish tradition.

What every mythologist agrees on, however, is that Lilith was Adam’s wife. His first wife. The wife before Eve.

Now, this is quite a revolutionary idea. Was Eve not the first woman? Was God not able to make a perfect female on his first try? Surely Jews would reject this non-traditional, obviously heretical idea – but no! Lilith appears in four different Jewish texts. The first text is the Book of Isaiah, chapter 34, verse 14:

And the wildcats shall meet with the jackals, and the satyr shall call out to her fellow, and there Lilith will repose and find her rest

In some cases, Lilith is translated as “night demon,” a translation that evokes the name’s similarity to the Hebrew word for night, laila (לילה). Either way, found in a list with wildcats, jackals and satyrs, Lilith can’t be something that we want to be around. 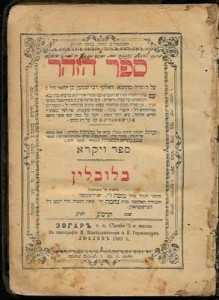 A page from The Zohar

The second source in which Lilith is mentioned is the Zohar, Judaism’s primary Kabbalistic text written around 1200 CE. The Zohar mentions Lilith in at least 27 different passages, expounding upon her origins and her demonic qualities. A third source on Lilith, entitled The Alphabet of Ben Sira, was also written in the Middle Ages, and contains a great deal of midrash as well as the story of Ben Sira’s life, written in a satirical (and some experts say heretical) style. The fourth place we find Lilith is in the Talmud, where she is mentioned in four separate tractates: Shabbat, Eruvin, Bava Batra, and Niddah.

So, what do these sources say? What is the Legend of Lilith?

Lilith and Adam were created in Chapter One of Genesis (verse 27):
“…male and female He created them” “זכר ונקבה ברא אתם…”
Both were created from the ground. Both were created at the same time. They were inherent equals. Soon, the time came for them to have sex. Adam insisted that Lilith lie beneath him, but she refused, insisting to be beneath Adam in no earthly matter. The two fought, both deeply incensed, and Lilith uttered the four-letter name of God. This utterance gave her so much power that she threw herself into the air and flew all the way to the Red Sea. Three angels tried to convince her to return to Eden, but she refused, taking instead the role of a female demon, forever destined to harm newborn infants and women in childbirth. Back in the garden, Chapter Two of Genesis was taking place: God knew Adam was overwrought by his loss, so He reformed the earth quickly and with a reparation. This time, instead of creating man and woman from the same dust, God created man from the dust of the earth and then created woman from his rib.

And the man said, “This time, the bone is from my bones and the flesh from my flesh; I will call this ‘woman’ because it was taken from man” (Genesis 2:23)

Man and Woman were no longer equal beings. Now they could live in harmony, each fulfilling a different role. And the Fall continues from here. 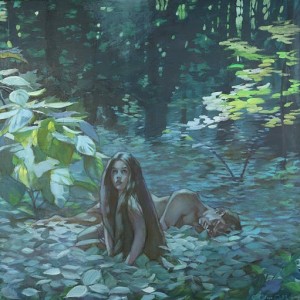 Adam sleeps as Eve emerges, taking in her new world

Let us take a moment to compare Lilith and Eve. What was Lilith’s sin? She wanted equality. She also did not want to be continuously relegated to “the bottom” (and according to the modern world, she’s certainly not the only woman who had this fantasy). And for these crimes, she becomes a demon. Her willful and disobedient ways lead her to be the first human exiled from the Garden of Eden. And compared to Lilith, Eve is a gem. Eve, once a symbol of temptation, sexuality, knowledge, and sin, seems merely a naive girl when compared to her predecessor. Eve didn’t even know what sex was, let alone the position she should take.

In mainstream modern culture, the traits associated with Lilith and Eve have all blended together into Eve – the woman who sinned; the woman who wanted more than what was allotted to her. We learn from her what not to do; we learn from her curiosity and her desire to contain our own; to not give in and grab the fruit.

But more questions still trouble the mind. Why is it always the woman who sins? How can Eden have been perfect if Lilith was there and then gone? Was Lilith’s desire for equality truly unattainable and obscene? The truth of the story is not at issue here; if one wants to argue myth versus fact, the entire Bible can feed that hungry mind. Rather, regarding the legend of Lilith, the productive mind will analyze the story’s purpose as a story and its relation to the text, the religion, and the culture to which it belongs. What does it push us to think about? Which human values does it appeal to? What draws us toward it or pushes us away from it? Is it a story of the ancients or can it be embraced by the moderns as well?

The Legend of Lilith: leading to more questions than answers since the beginning of time. 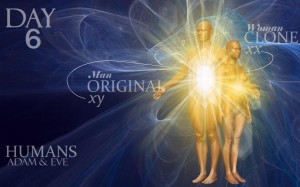 A scientific take on the creation of man and woman

And now, in the spirit of creation, here is a short piece that I wrote last year for my creative writing workshop. The prompt was “Journey,” from Jerome Stern’s Making Shapely Fiction: “The Journey is the oldest, truest, most inescapable shape for a story….What makes it a Journey is that ordinary life is left behind” (33). Enjoy! 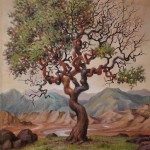 She had always wondered what the tree would look like. Forbidden from her, it had built itself, branch by branch, inside her head. It was strong and solid; the bark was rough but the leaves were smooth. It had been on this earth only three days longer than she, but in this mess of time, three days was an eternity.

The walk up the hill had been long, and harder than she expected. The snake met her at the bottom of the hill, right where the yellow flowers sprung up beneath the purple. He slithered in front of her, leading the way up the crisscrossing paths of crumbling dirt and through the mounds of rounded, brown stones. She kept her eyes trained on his silvery body, neglecting her feet and earning herself countless scrapes on her tender heels. If someone had been searching for her, he could have followed her path by the slight red streaks in the dirt.

Halfway up, they stopped. She was breathing hard, and when she touched her finger to her bare stomach, it came away with a drop of sweat. The wind blew her hair off of her neck, and she lifted her chin to feel its breath. She looked to the right and saw puffs of cloud shading the cattle-plump fields. She looked to the left and saw diamonds of light glinting off of the ocean. She looked up and squinted her eyes at the brightness of the wings. She looked behind her, and saw all the colors of the earth.

The words of the man still rang in her ears.

“I was warned,” he had panted, running out from the cover of the chirping glade. “Don’t eat it.” He was doubled over. “If you eat it, you’ll die.”

Die? What was die? Everything around her was moving and crawling, and she did not know this strange word that came out of his mouth. Did he know what it meant? She tried to ask, but he was too out-of-breath to answer. From his tone of voice, die did not sound like something she wanted to do. But when she asked the snake, he assured her that it only happened to those who were old. Old. Yet another word she did not know. All she knew was that she wasn’t it.

She drifted away, wondering at the strangeness of his command. She knew what “it” was—but why would she want to eat it? So far, she had eaten small, round, juicy sacs that filled her cheek with sweetness and surrendered to the sharpness of her hungry teeth. Why would she desire anything else?

She gleaned another drop of sweat from her navel and nodded to the snake. They continued on. 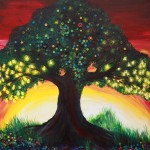 And now she knew what Adam had meant when he said “Don’t eat it.” From the tips of the branches hung the most beautiful fruit: rounder, plumper, fuller, and fleshier than any her lips had tasted so far. And the skins were different. Obscuring the bursts of color were thousands of tiny letters, letters that glinted in the light and shone with mystery.

Her hand reached out for the secrets. The fruit was soft beneath her palm, and came away easily from the branch. The serpent slithered up the trunk of the tree. It looked her in the eye. Eve sunk her teeth into the knowledge of good and evil. 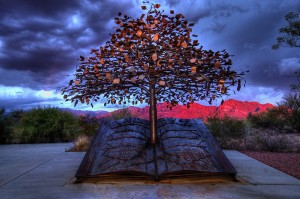 The Tree of Knowledge – a sculpture 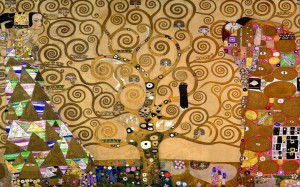 Literature with a Genesis theme:

“The Diary of Adam and Eve,” by Mark Twain
“Paradise Lost,” by John Milton
“East of Eden,” by John Steinbeck
So much more…Please comment with your favorites!