Does any other language have a word for the particular pride we feel when someone we love does something great? I am not sure, but perhaps this is specific to the Jewish people and their languages of Yiddish and Hebrew. Nachas. It is exactly that: a word that describes in two syllables the almost indescribable chest-swelling emotion that fills us with joy because of the accomplishment of another.

Sheppen nachas, or as we say in Yinglish “to shep nachas,” is the action of feeling that feeling. It is interesting to note that the verb sheppen, which means “to draw, to sip, or to derive” is most commonly used with the word nachas.  They go together such that in Yinglish we wouldn’t say one without the other, although we could very well shep water or a variety of other things if we wanted.

A few weeks ago my cousin came to Israel for the first time. When she walked up to me, I couldn’t believe that she was really here, in this land, in Tel Aviv, in front of me. I literally never thought I’d see the day. I couldn’t help but cry. If you will it, it is no dream.

The next day, she called a guy I had met a few weeks earlier to inquire about playing soccer with his team. Ballsy, I thought (no pun intended), since she doesn’t speak Hebrew. He invited her to join them, and I met her in Tel Aviv to watch. It was one day after Birthright, her 11th day in the country, and she was joining a soccer team with not much introduction and not knowing enough Hebrew to understand the calls. I’ve been here almost two years, and I don’t cycle with Israelis because I am afraid of not speaking the language. Of course, this is probably why I don’t speak the language.

As soon as she started to play, I called her parents to tell them where I was and what I was witnessing. “I am watching your daughter play soccer with an all men’s soccer team in Tel Aviv,” I said. “I’ve never been more impressed.” And then she scored a goal!

“GOOOOOOAAAAL!” I screamed, deafening my aunt 6,000 miles away and causing my cousin to look at me with exaggerated lips turned up and eyebrows arched to frown at what she perceived as my exaggerated enthusiasm. Then she scored again. 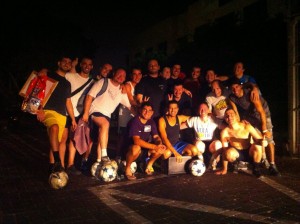 After scoring three goals, more than any of the other guys, she and her team won their game, and the guys came back to the sidelines in really good spirits, high-fiving each other and my cousin, that beautiful game of football speaking every language. What a wonderful skill to bring with you around the world. The nachaspooled on the astroturf forming puddles at my feet.

The one thing I left out when I called her parents was that the soccer team, Rainball, is a gay soccer team. She’d come out to her mother already, but she’d never told her father. You don’t have to be gay to play with Rainball, except in her dad’s mind, so I didn’t mention it. He has his suspicions, but all of them based on stereotypes and ignorance, so we leave him happily in his own red state of Don’t Ask Don’t Tell.

Which leads me to my other reason for shepping some serious nachas, this time for my country of origin. G/d bless the USA for finally making progress on actually defending marriage by declaring the Defense of Marriage Act unconstitutional. Prop 8, the ping ponging proposition that, even after working on the campaign, I am not sure if I am supposed to vote yes or no to bring California closer to marriage equality, has now been vacated. There’s still work to do, but we are getting closer. If I could have lit up my room like a rainbow flag I would have in solidarity with San Francisco’s city hall, the fountain in front spouting nachas. 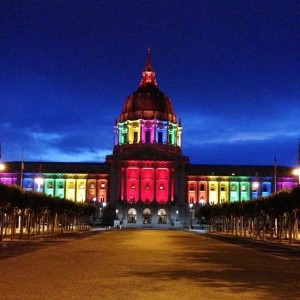 I am, admittedly, one of those liberals who takes up a good fight on behalf of some perceived injustice without ever having felt much of that injustice thrown in my direction. I am fortunate enough to live at a time when Jews are treated pretty well in America, woman are educated equally and paid with better parity, sexual harassment is called the spade that it is, and to reproduce or not is a right. I am lucky not to have had to fight the good fight.

One week after repealing DOMA and Prop 8, one week after returning to the new and improved United States from Israel, my cousin, the goal-scoring, inner-city-school-teaching, med-school-starting, nachas-inducing only child of my mother’s only sister, faced her own civil rights fight in the discomfort of her own home.

After going to dinner with a high school friend she’s known for 10 years, she returned to her parent’s house with a threat from her father that if she hangs out with people like that she shouldn’t come home. My cousin had three choices: allow her father to disparage her friend as if it doesn’t disparage her too; fight for her friend as if it only pertained to the friend and not to my cousin personally; or come out to the last person on earth that doesn’t [want to] know that his daughter is gay.

Facing her father, my cousin told him that she’s into woman, and then she rebutted each point of stereotypical, ignorant debate he could conjure, defeating him with logic and stamina. She is indeed a formidable opponent.

From the sidelines, 6,000 miles away, cheering all the while, I stood by holding my breath for the results of the supreme court taking up the bench in my family’s house in the suburbs. Like the Defense of Marriage Act, I wouldn’t say gay rights are in the clear, but they did take a giant step forward in vacating the previous judgment.

Never having needed to defend my identity or fight for my rights, I can only look on in awe and with great respect. It is no small thing to come out, and all the more so under hostile circumstances. My deafening scream of “GOOOOOOAAAAL” could be heard in the States, no doubt, and the sea of nachas I am swimming in spans the distance.