Posted on September 16, 2013 by The Director of Digital Media

I walked out of Shul on Friday night, after Kol Nidre, feeling a little bit guilty. I beat my chest, I proclaimed the words, but I didn’t feel truly connected to sins that seemed so grand. I rattled off ashamnu, bagadnu, dibarnu dofi…., but my heart wasn’t in it. I guess I fell into the category of insincere confession, but it had been something that I had been struggling with over the entire course of the yamim noraim and I had to figure it out.

I spent almost the last two weeks discussing teshuva, the process of returning and repenting. I’ve come to the conclusion that the process of teshuva is not a burden, as many of us would think it was. Instead, it’s a gift. Imagine that our connection to Hashem was a physical one. That we were literally attached to Him by a string and each time we sinned, the string was cut. The process of repenting for our sins is the process of actively working to get the string to return to completeness. As anyone who has ever cut a string and tied it together again can attest to, when you do so, the string becomes shorter. When you tie the knot, a little bit of the string is eaten up in the knot and the two things that were tied together become closer. And Hashem the ruler of all things, including the string, is giving us the power to retie it and not only reconnect ourselves, but actually bring us closer together.

The process of retying is not as simple as that, though. Teshuva, the process of personal introspection and growth, includes a review of the past and a critical plan for the future. However, in exploring the “Alphabet of Woes,” I wasn’t sure that it was an accurate review of my past. I am by no means claiming that I am perfect, most likely far from it. At the same time, I didn’t feel that I had been as terrible as I was confessing that I had been.

I read something that Rabbi Yoni Rosensweig wrote, saying that often times we simply list off our sins, focusing on the things that we think we committed, thinking that it will make them go away. He suggested a deeper form of teshuva, that by focusing on what we want for ourselves in the future, and outlining our vision, we can find the necessary inspiration to really make a change. This really got me thinking. I might not be able to identify specific instances where I had sinned, but I could point to places where I could have done better. I tried to transition myself from a place of, “you should feel like you really messed up this year,” to a place of, “you should try a little harder next year.”

Hashem, honestly, I don’t think I was a bad person this year. I definitely didn’t always do what was best, but I did try my best. I try to uphold the values of truth and justice, and I seek them in my life and my community. I’ve tried to become more connected to Judaism, I’ve dedicated a year to studying in Israel, and I think that’s pretty good. I know I could have done better, though.

While all of these ideas ran through my head, I felt pressured. I knew that I had to find meaning in Yom Kippur and that I had to confess sincerely. If not for the supreme and awesome power of the day, then simply for my own satisfaction. My intense thoughts were abruptly disrupted as soon as I walked out of the synagogue and onto the street Friday night. While many Jews had spent the last 2 hours fasting and confessing, modern, non-religious Jews had taken to the streets for a block party of sorts. 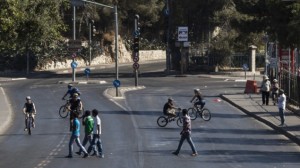 The bikes are taking over the street

I had heard that the street lights wouldn’t be working, that the street would be void of cars and that people often rode bikes on major thoroughfares simply because they could on Yom Kippur. As I stepped out onto the street, the rumors transitioned into reality. Derech Hebron, the street that I live off of, was packed. It almost looked as if the street had been shut down and a parade was about to walk by. People were sitting in the street, small children were riding their bikes down the road, teenagers flocked to the corner like it was the coolest hangout in all of Jerusalem. With cars off the roads, even the highways, there is even scientific research that shows the air is cleaner on Yom Kippur. Beyond the quiet of a regular Shabbat, the country literally stopped for 25 hours. The convenience store that markets itself on being the only thing open on our street 24/7 is, in fact, only open 364 days of the year.

It was amazing to get out of my head, if even for the 20 minutes that we walked around outside, to see the beauty that only exists in the State of Israel. It isn’t a law that you can’t drive on Yom Kippur, but it simply just isn’t done. That’s the difference between Israel and the Diaspora – society allows you to be Jewish and it’s amazing.

I went into Saturday feeling refreshed and cleansed. My mindset had been changed and my soul invigorated to start this year off in an incredibly freeing headspace. Instead of dwelling on sin, I was ready to emerge purified and eager to follow the pinpointed refinement that I had established for myself.

I hope that all of you found meaning in some part of a service, at a break fast meal, in a conversation with a friend, in a sermon from a Rabbi or just from seeing kids laugh as they peddled down the highway on their tricycle. May this be a meaningful year of growth and fulfillment for us all.