Posted on October 6, 2013 by The Director of Digital Media 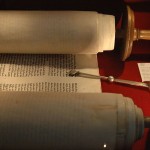 A Sefer Torah, the traditional form of the Hebrew Bible, is a scroll of parchment. (Photo credit: Wikipedia)

Our parasha last week, Noah, contains the famous story of the flood. However, I would like to focus instead on two words that border the flood narrative. The words in question appear in a number of other places in the Torah. More often than not, the appearance of these words is immediately followed by a change in relationship between God and the character who is involved in the interaction. For example, when Abraham is prepared to sacrifice his son, going so far as to raise the knife in his hand, an angel calls out to him. Avraham responds,  הנני (Hineini / Here I am). In the book of Shemot, which we will read in a few months, God calls out to Moshe, and Moshe answers הנני. Although I am not going to discuss all of the examples, it should be clear that הנני is a demarcation of an altered relationship. Assuming that interpretation of the word, why in our parasha does God utter הנני twice, when the subsequent relationship does not fundamentally change vis a vis the person to whom God is speaking?

The first appearance (actually second, but the first is probably for emphasis), appears in chapter six:

It would appear that the verse itself could function properly without the הנני. In other words, we might even be able to propose the possibility that the word is superfluous. Fortunately, Rashi, by way of the midrashic work Bereshit Rabbah, explains that God is affirming God’s role in the flood. Already God has instructed Noah to build the ark, down to the very dimensions, and will in coming verses instruct Noah on the numbers and types of animals that must accompany Noah and his family. Further, Rashi explains that God is acknowledging that what has been put in motion, and the rapid building of the ark is because God Himself is pushing the process forward. Noah and God’s relationship however, appears to be unchanged.

Following the flood, in chapter nine, God decides to create a covenant, promising to never again destroy the Earth by water:

Turning once again to Rashi for assistance. Rashi sends us back to his comment on the earlier verse. Here he quotes Midrash Tanchuma which puts forth the idea that Noah was worried about fulfilling the commandment of being fruitful without some assurance from God that there would never again be a mass destruction of humanity. God is actually recognizing Noah’s apprehension and knows that it is necessary to provide an active promise, just as God had earlier vocalized His part in the flood, even as Noah had until that point done all of the heavy lifting (pardon the pun). Granted, God does not permit Noah additional dominion over the Earth, I maintain the the relationship is fundamentally unchanged. So while we may have solved, with Rashi’s help, the problem of the dual appearance of הנני, and its lack of a subsequent relationship change, I am not entirely satisfied.

There must be an additional or supplemental understanding.

On both days of Rosh Hashanah and on Yom Kippur the leader of the Mussaf service intones a long personal supplication entitled הנני.  That person has been accepted the awe inspiring job of representing the assembled as they stand before God in prayer on those magnificent days. The chazzan is effectively laying everything on the table in a stand-up fashion. God in our parasha stands alone in the moments of uttering הנני. God or the chazan could remove themselves from the circumstances at hand, leaving everybody else to deal with the situation as it arises. Deriving from those assumptions, I think that God in our Parsha is demonstrating responsible action in both creating and solving situations in which God is significantly involved, and the use of הנני serves as God’s emphasizing the lesson that God wishes to impart.